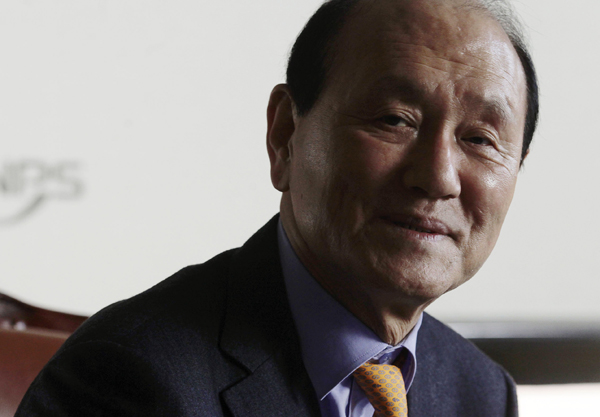 Korea’s National Pension Service plans to double its investment staff within three years and hire foreigners for the first time as the $400 billion fund boosts holdings of overseas assets.

NPS, whose 200 money-management employees earned about 83 million won ($77,000) on average last year, must increase salaries to attract talent in New York and London, said Chief Executive Officer Choi Kwang. The fund started a team this month to manage its foreign-exchange risk and is studying investments in hedge funds. It plans to lift overseas holdings to about 30 percent of assets from 20 percent within five years.

The world’s third-largest pension fund has become too big for Korean markets after growing to about 33 percent of the nation’s gross domestic product, according to Choi, a former economics professor who also took over as chairman in May. He said NPS has looked to Temasek Holdings, the Singapore state-owned investment firm with about 70 percent of its holdings overseas, for ideas on how to expand abroad.

“NPS is a big whale in a small pond,” Choi said in an interview at the fund’s office in downtown Seoul, the capital of Asia’s fourth-biggest economy. “We have to go out.”

The fund, which was set up in 1988 to manage pensions for private-sector workers and the self-employed, will probably grow to $2.2 trillion within 30 years, Choi said. It must send more money overseas to avoid roiling local financial markets when it eventually becomes a net seller of assets to fund payouts to beneficiaries, he said.

NPS holdings of local stocks account for about 7 percent of the benchmark Kospi index and the pension is the biggest outside shareholder in Samsung Electronics, Korea’s largest company by market value.

The fund’s heft has spurred concern among some critics, including the Federation of Korean Industries, that it could be used by the government to meddle in markets.

NPS needs final approval from a committee led by the health minister for allocation of funds. Choi’s appointment was approved by the health and welfare ministry, along with President Park Geun-hye.

The pension rejected about 17 percent of proposals put to shareholders by Korean companies in 2012, according to report by the National Pension Research Institute published on its website on Jan. 7. That’s up from 7 percent in 2011.

NPS makes investment decisions based on the outlook for returns, Choi said. It hasn’t yet seen any buying opportunities among state-owned firms seeking to unload assets as they cut debt, he said.

President Park’s administration plans to reduce the average debt-to-equity ratio at 41 public companies to 200 percent by 2017 from 220 percent at the end of 2012.

“Whether it is a public or private corporation, the most important criteria is profitability,” Choi said. “Every decision is solely based on market principles because we’re not a charity.”

The fund posted a return of about 7 percent in 2012, the latest annual figure, and gained an estimated 3.7 percent last year through October. Its holdings of domestic equities rose 10.2 percent in 2012, versus 10.4 percent for overseas shares. Local fixed-income securities added 5.8 percent while foreign debt returned 9.6 percent.

NPS has target weightings of about 30 percent for equities and 58 percent for debt this year, with the rest in alternative assets such as real estate. It has been increasing positions in overseas equities and alternative investments while cutting local debt holdings, Choi said.

The fund plans to grow its London office to as many as 30 people from about four and increase its New York staff to 40 from five.

It bought Chevron’s stake in U.S. pipeline operator Colonial Pipeline in 2010, while other overseas investments include HSBC Holdings’ London headquarters and Gatwick airport in the U.K.

To attract the best managers, NPS will have to convince the Korean government to allow higher compensation packages, Choi said. Temasek recruits people from around the world, he said.

Starting salaries in the hedge fund industry are about $335,000, according to Bloomberg BNA, which cited the 2014 Glocap Hedge Fund Compensation report. That’s about four times more than the average total compensation at NPS last year.

“It is true that it’s rather difficult to lure a bigger pool of passionate and capable people with the small pay and big turnover at the NPS,” said Han Sang-soo, a money manager at Samsung Asset Management, which oversees about $119 billion, said. “They should pay at least 70 percent of what the financial industry is getting.”

The fund’s CEO received total compensation of about $158,200 in 2012, versus $7.3 million for the head of Aberdeen Asset Management, a London-listed money manager that oversees about $320 billion, data compiled by Bloomberg show.

“We’re managing $400 billion in international financial markets, that’s the given,” Choi said. “It will take time, but I’ll persuade the government to pay the market price.”

Returns from overseas markets have topped those of Korea in the past 12 months. The MSCI All-Country World Index has climbed 9.4 percent during the period through Thursday, versus a 1.5 percent drop in the Kospi, the benchmark gauge of Korea’s $1.1 trillion stock market.