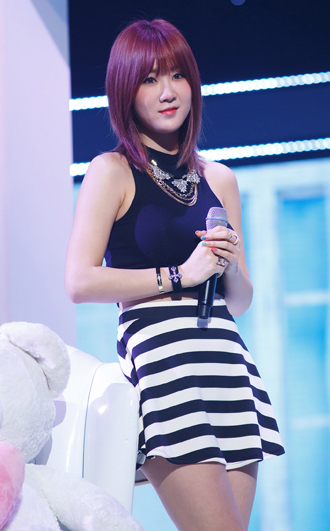 The song, “Some,” previously garnered much attention for its music video, as Baro of the boy group B1A4 and Dasom of Sistar appeared as a couple in it.

Go debuted in 2002 after being featured in singer I.F’s “Respect You.” He then worked with many other local singers, including Epic High, Soul Dive and Mad Clown. The rapper has five EPs and one mini-album and has written and composed many of his own songs.

So-you is one of Korea’s rising vocal talents. Her song “Stupid Love” with rapper Mad Clown topped many music charts in September.

So-you and Go will promote “Some” through music programs on TV in the coming days.

Meanwhile, fans who want to see a more down-to-earth side of So-you can turn to cable channel Y-Star as “Sistar’s Midnight Hong Kong” will feature her and other members of the group during their trip to Hong Kong.

The show will start its run tomorrow at 11 p.m.