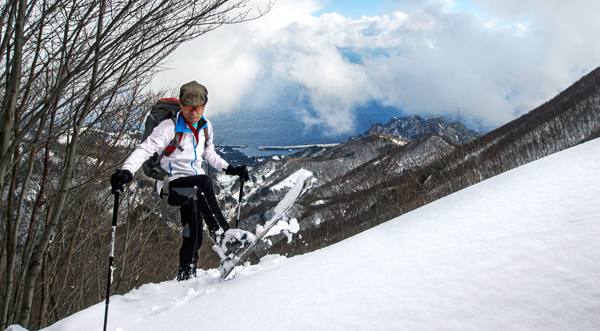 This photo wasn’t taken from a ski resort, but from Ulleung Island, which had 150 centimeters (59 inches) of snow last month alone.By Shin Dong-yeon

What part of Korea gets the most snow? The answer is Ulleung Island, which is about 120 kilometers (75 miles) east of the Korean Peninsula.

In big cities like Seoul, it only takes 3 centimeters (1.2 inches) of snow to slow everything down, from people to traffic. But snowfalls of up to 30 centimeters are the norm on the volcanic island.

In January alone, 150 centimeters of snow fell there.

Although the island is very scenic, it isn’t easily accessible. Ferries that take passengers from Pohang to Ulleung Island were shut down for several days last month because of strong wind and high waves.

Ferries usually leave from Pohang between 9 a.m. and 10 a.m., but those times are often updated only two or three hours before the scheduled departures.

As a result, traveling to the island at this time of year is no easy task. If you are leaving from Seoul, it can take more than 10 hours to make the one-way trip, which is equivalent to the time it takes to fly from Seoul to Los Angeles.

You never know when your ferry might be canceled, too.

Despite the odds, Ulleung Island is a place everyone should see before they die, especially in winter. 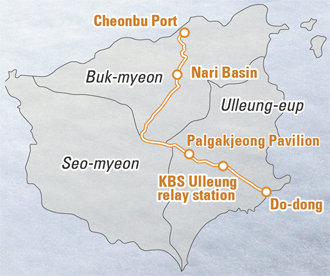 The best way to enjoy the interior of the snowy island is to hike to Seonginbong Peak, which is 986 meters (3,234 feet) above sea level. It’s not a very high peak, but reaching it isn’t easy, even for experienced hikers, when it’s covered with snow.

After spending a night on the island, I met members of the Ulleung Mountaineering Club at the entrance to Seonginbong Peak.

The weather was perfect. It was even a little hot, but one of the club members said, “You never know what the weather will be like when we go up.”

Snow covered almost everything, from animals to trees to rocks, except us. It was impossible to take a single step without following the mountaineering club members, who broke trails through the snow.

Two hours after we began, we reached Palgakjeong Pavilion, and my heart was pounding.

“Now the real journey begins. The two-hour hike was just a warm-up,” said Lee Gyeong-tae, 53, a member of the mountaineering club, as he took the lead.

Around the time when our team reached Taeha Lighthouse, also known as Ulleungdo Lighthouse, snow flurries began to fall. The snow soon turned into large, fat flakes and showed no sign of stopping. Seonginbong’s Peak was only 1 kilometer away, but we had to stop for a while. We decided to get out of the snow and eat lunch. 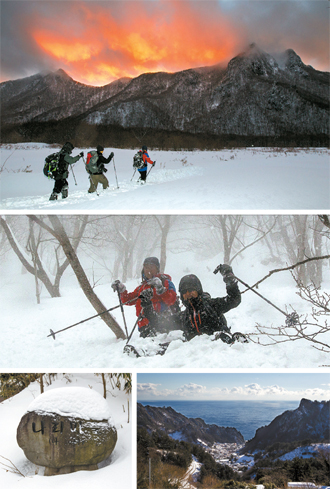 From top: The setting sun turns everything red at Seonginbong Peak. Ascending the mountain usually takes longer than descending it. You can either ski down or slide down on Ulleung Island. A stone sign bearing the name of Nari Village, which is near Nari Basin at Seonginbong Peak.

The mountaineering club members had prepared a feast. Skis were turned into chopping boards, and the members began grilling pork belly. They also scooped cups of snow, then boiled it to make instant noodles. The sumptuous lunch ended with a sugary cup of instant coffee.

After the lunch, the hike resumed. The way to the peak was getting tougher. The snow was already crotch-high, and the wind was harsh as it slapped my cheeks.

“Now we only have 300 meters to go. Why don’t you take the lead this time?” asked one of the club members.

I accepted his offer but gave up the lead after only 50 meters. When leading, you have to break trails by kicking the snow and stomping on it, but that exhausted me in just a few minutes.

My legs were shaking, and I was drenched with sweat. Then, a cozy, snowy flatland, which looked like a small garden, appeared. It was surrounded by snow-covered trees. A stone sign bearing the name of Seonginbong barely revealed the first character, Seong, meaning that the snow was about 1 meter high.

It was 3 p.m. and we had to hurry to descend, otherwise the sun would go down before we got back.

But we didn’t worry that much. Ascending usually takes more time than descending, but you have two ways of coming down on Ulleung Island: skiing or sliding.

Two of the mountaineering club members fastened their skis. We were told to zip all our pockets up. The two members skied down through the trees and the rest of us slid down. It was fun and much faster than walking down.

We went down to Albong Observatory, and the trail was less steep from there. It was lined with pine trees, a sign that we were getting close to the bottom. The glow of the setting sun turned everything red.

The snowy landscape and the setting sun are two great reasons why you should visit Ulleung Island before the winter chill has gone. 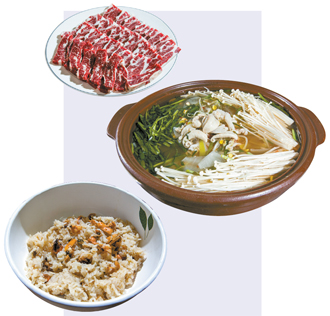 Top: Beef from cattle raised only on wild medicinal herbs. Middle: Stew boiled with the intestines of freshly caught squid. Above: Seasoned rice with hard-shelled mussels.

If you want to climb Seonginbong Peak, you have to be fully prepared. Arctic clothing, waterproof hiking boots, cleats, spats and trekking poles are a must.

Both veterans and novice hikers are recommended to go hiking with experts, or you can follow trails created by the Ulleung Mountaineering Club - they pave some every weekend.

During winter, the most ideal hiking course starts from the KBS relay station to Palgakjeong Pavilion to Seonginbong Peak to Nari Basin. It usually takes six hours to complete, but it took me eight hours.

For more details, go to the Ulleung Mountaineering Club’s website at cafe.daum.net/ulac. (The site is only available in Korean.)

Be sure not to miss the island’s winter delicacies, too.

Fat and juicy mussels are another of the island’s local delicacies.

Bobae Sikdang, another eatery on Ulleung Island, has two options: seasoned rice with hard-shelled mussels and congee boiled with mussels.

Beef from cattle raised only on wild medicinal herbs is a rare dish available on the island.

The beef’s texture is much tougher than ordinary beef, so it’s very chewy. If you want to try it, ask locals which restaurant has purchased the special beef for the day.

It’s possible to take ferries from Pohang, Gangneung and Donghae to the island, but only the ferry terminal in Pohang is open during winter.

Ferries depart every morning between 9 a.m. and 10 a.m., but the departure schedule is updated at around 7 a.m. each day because of changing sea conditions. It costs about 70,000 won for a single ferry ride.

Nari Basin is halfway up the mountain on the way to Seonginbong Peak.