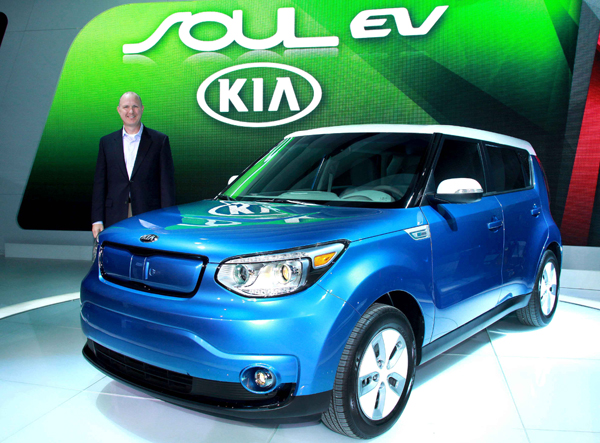 Kia Motors America Vice President Orth Hedrick poses next to the Soul EV at the Chicago Auto Show. Provided by the company

Kia Motors rolled out an electric version of its Soul compact car on Thursday that the Korean automaker plans to begin selling in some U.S. markets later this year.

The 2015 Soul EV, unveiled at the media kick-off for the 2014 Chicago Auto Show, is Kia’s first all-electric, zero-emissions car in the United States and its second “green” car for the U.S. market. It joins a hybrid version of its best-selling Optima sedan that has been available here since 2011.
The Soul EV is powered by an air-cooled lithium-ion polymer battery and an 81.4 kW, 109-horsepower, liquid-cooled electric motor, which produces 210 pound feet of torque, according to Kia.

The Soul EV will initially be sold in a handful of states, including California and Oregon, beginning in August, and in New York, New Jersey and Maryland early next year.

Pricing has not yet been announced. In an interview with Reuters on Thursday, Orth Hedrick, the vice president for product planning at Kia Motors America, said the company was waiting to set preliminary sales goals for the new vehicle.

“We don’t have firm targets yet,” Hedrick said. “This is a start-up operation that we have to get dealers to opt into. We don’t just give it to them. We have to certify them. They have to go through training. So we’re a little bit early yet to have a definitive number.”

U.S. demand for electric vehicles has confounded some of the old-line carmakers, including General Motors and Nissan Motor that were early movers in the marketplace.

Both companies have had to slash prices and offer other aggressive incentives on their EVs - and still barely outsold the Tesla Model S, a battery-powered luxury sedan offered by newcomer Tesla Motors Inc. that is double the price of Nissan’s Leaf and Chevrolet’s Volt.

In 2013, Tesla sold just over 19,000 of its pricey S models, according to full-year sales figures from Autodata, compared with more than 22,000 for Leaf and more than 23,000 for the Volt.
Worldwide production of electric vehicles is forecast to increase 67 percent to 403,000 units this year, according to IHS Automotive and Polk.
The increase in EV production is expected to come even as global vehicle production rises less than 4 percent in 2014.

Several European carmakers, including BMW, Volkswagen, Mercedes-Benz and Audi, are introducing electric propulsion vehicles in 2014 to comply with strict new emission rules.
Despite an aggressive campaign by the carmakers to push EVs, a push that has included free charging stations at some dealerships and a raft of price cuts and cheap lease deals, the vehicles have not been hot sellers.

Obstacles to EV sales include overcoming buyer concerns about the vehicles’ short driving range, long charging times and lack of charging stations.
Retail sales staff also are reluctant to spend the extra time it takes to educate buyers about the benefits of electric cars and how they differ from conventional models.

There is also serious disagreement whether the long-term future of emission-free cars will belong to electric vehicles or to hydrogen fuel cell vehicles, which have longer range than the current generation but involve a technology and fuel that is new - and unavailable - to most U.S. consumers.
Hedrick said Kia believes that, for now at least, EVs represent the way forward. “It’s a lot more accessible - mainly because of the infrastructure,” he said. “(So) for the foreseeable future, electric is the way to go.”

In January, Kia said it expects its global retail sales to rise 6 percent to 2.9 million vehicles in 2014, driven by demand in China and the United States, where the company expects to sell 630,000 and 585,000 vehicles, respectively.