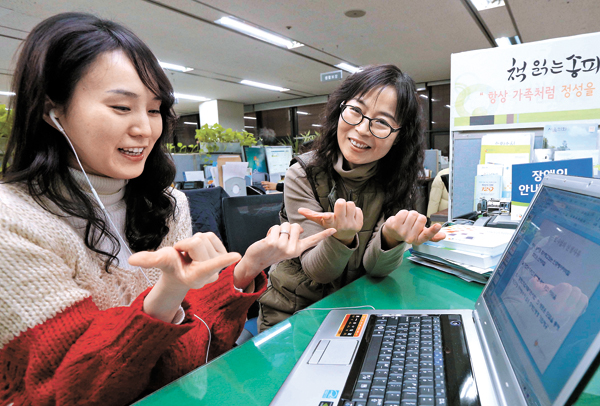 Ko Eun-seong, 36, and Jeong Mi-hee, 49, are practically attached at the hip. The two women, both employees at the Songpa District Office, are colleagues and friends, as well as each other’s eyes and ears.

Ko is visually impaired, while Jeong is hearing impaired. And through team work and mutual understanding, the two ladies carry out their day-to-day duties.

They began working together in January, when Jeong was hired by the office as a translator for the visually challenged. The two say they are together all the time and even socialize with fellow co-workers in the evenings.

“I spend more time with Ko than with my husband,” Jeong joked.

Ko started working at the Songpa District Office seven years ago after it established a support program for the disabled. She earned her social welfare certificate and has continued to work at the district office since.

Ko helps Jeong by acting as her ears. When their team leader on the other side of the office calls out Jeong’s name, Ko taps her on the shoulder to alert her.

And when the phone rings, Ko answers. In one instance, the caller was a counselor at the Dasan Call Center (#120), which covers civil complaints from 25 districts in Seoul. The person on the other end of the line was asking about a policy concerning apartment applications for the disabled.

“Can you check the guidebook [of welfare services provided by the Seoul Metropolitan Government]?” Ko asked.

Jeong flipped through the book, looked up the relevant information and read out the answer. Ko then explained the procedures accordingly.

When the JoongAng Ilbo visited them on Jan. 20, Ko was using a screen reader to write a draft for a side-dish delivery project for the handicapped. The program she uses reads out what the monitor shows. Her work is corrected and edited once she’s finished, and that’s where Jeong comes in, checking the spacing or line breaks the computer missed.

But perhaps most unique thing about the two women - and their relationship - is that neither Ko nor Jeong were born with disabilities.

Ko suffers from retinitis pigmentosa, a degenerative eye disease in which one’s vision deteriorates, often entirely. Symptoms struck when she was a 22-year-old university student and, as her vision got worse, she had to give up her studies.

However, after she became completely blind, Ko decided to begin studying again, taking classes online and eventually obtaining her degree in social welfare in 2006.

After a great deal of effort and hard work, she passed the civil service exam in 2010 and has since gotten married.

Jeong, on the other hand, said she began losing her sense of hearing in 1976, when she was just 11 years old. She knew it was a problem when her homeroom teacher put his wristwatch up to her ear and she couldn’t hear it tick. As a teen, she enjoyed practicing the English language, but she eventually gave it up in her high school years when she could barely distinguish sounds.

Jeong entered the workforce after graduating from Kwandong University in Gangneung, Gangwon, but abandoned it after two years. She went back to work when the district office started its support program.

Both agree that having been formerly physically able helps them in their jobs now.

“We live in a rapidly aging society. Anyone could become handicapped all of a sudden,” Jeong said. “We can serve people with or without disabilities because we have experienced both.”

Since the end of last year, the Songpa District Office has also undergone changes. A voice notification system was set up in the elevator to indicate the floor level, and members of the staff have changed their name cards so that they’re also inscribed in Braille.

“People need others’ help,” Ko said. “Being handicapped only means that they need just a little more help.”