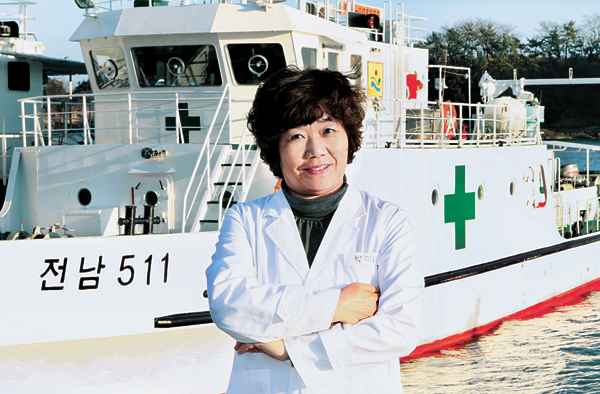 Park Mi-suk has spent the better part of her life on a boat, traversing the waters around 86 islands in South Jeolla. In that time, the 60-year-old X-ray technician has become an adept sailor.

She’s a permanent fixture on the Jeonnam 511, a government-run South Korean medical ship whose crew of doctors and nurses provides health care services to those in remote areas without clinics; and she has also become a mother figure to the staff, calming them during storms and gently nudging them to mind their manners.

Park began her career in 1978, right out of college, when she was just 24, working as a radiographer on a boat that provided medical care to island residents who lacked access to proper treatment.

When her family decided to move to Argentina, she insisted on keeping her job in Korea.

“I liked the ocean and the islands, maybe because I’m from Suncheon, a coastal city in South Jeolla,” Park said. “And I also wanted to work for the government just like my father who used to [oversee] a small train station.”

Even though the majority of the medical staff eventually return to working in conventional clinics on land, she has remained, though it wasn’t an easy choice.

Park married when she was 33, and she and her husband have two daughters together. He and the girls live in Cheongju, in North Chungcheong - a considerable distance from the South Jeolla coast - and her mother-in-law helps out where she can while Park is away.

She misses them, of course, but she also loves her job. Park ultimately decided to stay on board, she said, when she saw the difference the medical team was making to the lives of their patients.

But working on a boat isn’t always a pleasant experience, nor is it necessarily safe. Park can recall a few times when the vessel nearly wrecked out at sea. About 25 years ago, she said, when the crew was returning to harbor in Mokpo, South Jeolla, the ship struggled through raging waters. The captain lost control, and some of the medical team even burst into tears.

However, it worked out in the end. The captain was able to moor the ship on an isolated island. Having experienced several serious storms over the past three decades, Park has a steely reserve and barely blinks at high waves or the slightest sign of bad weather.

“I talk to Park when the weather looks strange because she’s always on alert,” said Son Byung-oh, the captain of the Jeonnam 511.

For the ship’s employees, she is more than just the X-ray technician - she’s the matriarch.

When the staff tries to dodge chores or other responsibilities, Park is the one who sets them straight, making sure they clean up after meals and tend to their spaces.

“Doctors or nurses who volunteer to work in the sea are very committed,” Park said. “They soon understand the rules and make efforts to be on their best behavior.”

The 60-year-old mother figure even takes charge of the kitchen when the cook is on leave or unavailable.

Park is set to retire in June, though she is still dedicating herself helping those in need. Even finding her replacement has been difficult; the South Jeolla Provincial Government has been searching for her successor for at least a year now - perhaps a sign that her worth cannot be equaled.

“Having this work continue on is my responsibility, too,” Park said. “I want to put a respectable end to my career after 36 years.”