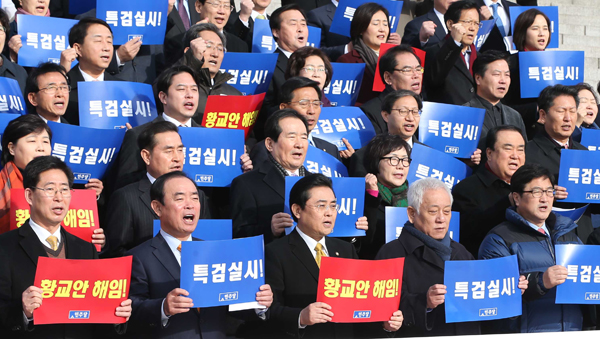 Lawmakers of the Democratic Party rally at the National Assembly yesterday to demand the dismissal of Justice Minister Hwang Kyo-an for a lackluster investigation into the NIS election smear campaign. By Oh Jong-taek

The opposition Democratic Party submitted a motion to the National Assembly yesterday to dismiss Justice Minister Hwang Kyo-an for his role in a Seoul court acquitting the former police chief of interfering with an election scandal investigation.

The Seoul Central District Court on Thursday acquitted Kim Yong-pan, former chief of the Seoul Metropolitan Police, of interfering in the investigation into allegations that the National Intelligence Service meddled in the 2012 presidential election and concealed evidence.

Kwon Eun-hee, a chief detective on the case with the Suseo Police Precinct at the time, called the court ruling “a shocking and completely unexpected result” during a press briefing held yesterday at the Songpa Police Precinct, southeastern Seoul.

Last spring, Kwon, who was leading the investigation into the suspected online smear campaign against opposition candidate Moon Jae-in, said that the Suseo police was under pressure from higher officials. Kwon is now a chief investigator at the Songpa Police Precinct.

Her testimony backed suspicions that the Seoul Metropolitan Police Agency went easy on its investigation of the National Intelligence Service’s meddling in the December 2012 presidential election.

The Seoul court ruled Thursday that Kim was not guilty of charges of deliberately concealing key evidence that the NIS allegedly systematically intervened in the presidential election through an online smear campaign.

He was also acquitted of charges of violating the election law by allegedly ordering his subordinates to whitewash the investigation results of the election scandal. The court ruled that there was not enough evidence to prove those charges.

In regards to the court’s conclusion that her testimony did not match that of other officials, Kwon said, “The court did not take into account the implicit facts [of the testimonies] and ruled not guilty.”

She added, “As a police official, I will take responsibility toward efforts for an appeals trial to reflect the clear facts and the law.”

It also requested that cabinet members of the Park Geun-hye administration should step down.

DP chairman Kim Han-gill said at a Supreme Council meeting yesterday that “a reinvestigation through a special probe is the only way for the truth to be revealed.”

Jun Byung-hun, DP floor leader, said, “We request the instigator of the biased investigations, Justice Minister Hwang Kyo-an, step down and for a special probe to be initiated by the Park Geun-hye administration.” This is not the first time the DP has filed a motion to dismiss Hwang.

The DP also submitted a motion to the Assembly to dismiss Education Minister Seo Nam-soo for lacking political neutral in a high school history textbook controversy.

The motions followed the removal of Yoon Jin-sook, minister of oceans and fisheries, from her post by President Park Geun-hye Thursday.

The motions for Hwang and Seo to step down were submitted later on that day to the National Assembly.

The ruling Saenuri Party yesterday scoffed at the request for a special probe, calling it “a denial of the separation of powers.” Saenuri floor leading Choi Kyung-hwan said, “The DP’s stubbornness to drive the whole country into a political whirlpool because it didn’t get the outcome it wanted, will not be allowed.”