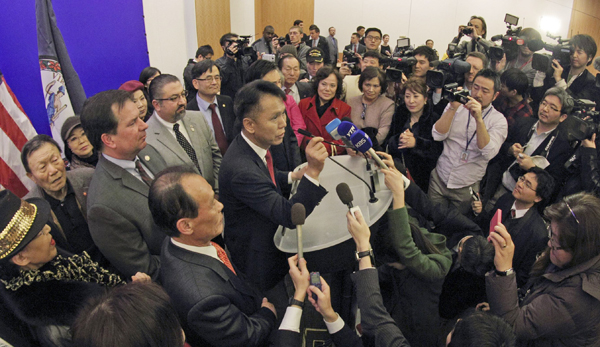 Peter Kim, a Virginia resident and president of the Voice of Korean Americans, speaks to supporters Thursday after the passage of Virginia House Bill 11 in the Virginia State Capitol, Richmond. The state approved a bill requiring the designation “East Sea” to be included in new school textbooks, clearing the last legislative hurdle for an initiative that was fiercely contested between Korea and Japan, two of America’s closest allies. [REUTERS/NEWSIS]

The Korean government yesterday welcomed a milestone legislation passed in Virginia that requires the use of the term “East Sea” when labeling the body of water between Korea and Japan in state textbooks.

Despite Tokyo’s efforts to block the law establishing the simultaneous use of “East Sea” and “Sea of Japan,” Virginia’s House of Delegates approved the bill on Thursday with overwhelming support in an 81 to 15 vote.

The bill states that all Virginia school textbooks approved by the Board of Education “when referring to the Sea of Japan, shall note that it is also called the East Sea.”

Governor Terry McAuliffe has the authority to veto the bill, though he has pledged to support it. With his signature, the measure is expected to take effect on July 1.

“Our government highly regards the efforts of the Korean community in the U.S. to expand the use of ‘East Sea’ through mobilizing the Virginia General Assembly,” Cho Tai-young, spokesman for the Korean Ministry of Foreign Affairs, said yesterday.

The victory for the Korean community came despite continuous efforts from the Japanese Embassy last month to convince McAuliffe and Virginian lawmakers to block the bill.

In December, the embassy hired a team of lobbyists from McGuireWoods, a leading lobbying firm in Richmond, signing a contract reportedly worth $75,000 to block the bill’s passage.

In a letter to McAuliffe, it claimed that passing the measure might damage “the strong economic ties between Japan and Virginia,” pointing out that Japan is one of the state’s largest trading partners.

The sizeable Korean-American community in Virginia, led by Voice of Korean Americans (VOKA), a local nonprofit organization promoting the use of the term “East Sea,” had emphasized the magnitude of the issue to its community there.

This “marks a new page in the 111-year history of Korean immigrants to the United States,” said Peter Y. Kim, president of VOKA, adding that this was the first time a law representing the Korean community had passed in the state’s House and Senate with such overwhelming support.

Kim also said he hoped other states would follow suit and that “other Korean-Americans in other states will try to correct their textbooks.”

The United States supports a one-name policy for geographical designations and currently uses the Sea of Japan as the official name of the body of water.

Korea claims the Sea of Japan designation did not become common until after the International Hydrographic Organization published the “Limits of the Oceans and the Seas” in 1929. At the time, Korea was under Japanese colonial rule and had no ability to influence international affairs.

As Seoul and Tokyo face frayed diplomatic relations as a result of simmering territorial and historical disputes, the Japanese government has stepped up lobbying efforts in Washington on another sore point: the “comfort women” issue, which refers to the women and girls forcibly recruited as sex slaves for the Japanese military during World War II.

The Hill, a congressional newspaper, reported on Thursday that at least two lobbying firms hired by the Japanese government - Hogan Lovells and Hecht Spencer& Associates - are monitoring calls from Washington for Japan to “apologize without equivocation” to the women who were forced into sexual slavery.

According to records from the U.S. Department of Justice, the Japanese government allegedly paid more than $523,000 to Hogan Lovells and $195,000 to Hecht Spencer between September 2012 and August 2013.

The law firms apparently kept track of comments from congressional representatives during an event honoring the sixth anniversary of the passage of a resolution on comfort women, and it also compiled a list of memorials, advertisements and state legislation concerning these victims from across the United States.

A nonbinding report urging the Japanese government to acknowledge and officially apologize to the women they forcibly recruited as sex slaves, was included as part of a spending bill, which was signed into law last month by U.S. President Barack Obama.

The document called on Tokyo to heed Resolution 121, passed by the House of Representatives in 2007, which stipulates that the Japanese government admit to its wartime past and officially apologize to the women affected by its transgressions.

Democratic California Congressman Mike Honda, who spearheaded efforts to pass the language in the spending bill, sent a letter to U.S. Secretary of State John Kerry recently emphasizing the importance of the issue.