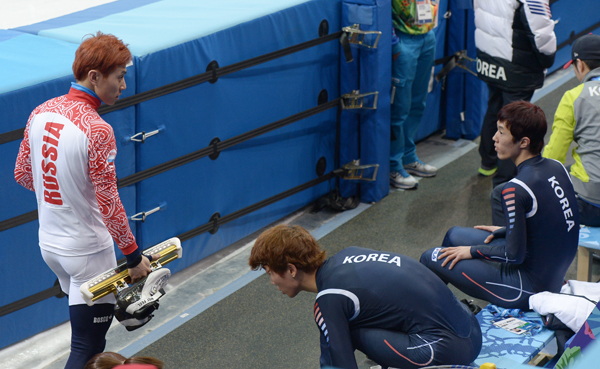 Korea’s quest to finish in the top 10 for its third consecutive Winter Olympics kicks off in earnest tonight. But in short track speed skating, traditionally one of the nation’s strongest events, Korea is facing some of the toughest odds in years.

Among those competing today are Shim Suk-hee, a 17-year-old rising star in women’s short track, and Kim Ah-rang, Park Seung-hee and Cho Hae-ri, who will all race in the 500 meters and 3,000 meters. In the 1,500-meter men’s race, Shin Da-woon, Lee Han-bin and Park Se-young will face Ahn Hyun-soo, the big star of the 2006 Turin Olympics who is now known as Viktor Ahn after becoming a Russian citizen.

Since the 1992 Albertville Olympics, Korea has clinched 37 medals in short track - 19 golds, 11 silvers and seven bronze. But in Vancouver in 2010, the country managed only two, won by Lee Jeong-soo in the 1,500-meter and 1,000-meter races. The women’s team failed to win any gold medals.

This year, the circumstance are looking a bit better for the Korean women’s team, especially because Wang Meng of China, who won three gold medals in Vancouver, will miss the events due to injuries.

The Korean women’s team is led by Shim, who won six gold medals in four Short Track World Cup events in the 2013 season. Shim will race in the 500-meter preliminaries, which begin at 7:27 p.m. today Korea time, followed by the 3,000-meter semifinals at 8:35 p.m.

Shim’s favorite competitions are the 1,000-meter and 1,500-meter events, and because Wang is not in Sochi, analysts predict the 17-year-old has an excellent chance of winning.

“Since this is our very first event in Sochi, we will focus on not making mistakes,” Shim told the Korean media yesterday. “I think we will get past the preliminary rounds for sure. The real races begin after that.”

It looks as though it is going to be hard for the men’s team to win a medal in every event at Sochi. In past years, the team always had one dominant skater - Kim Ki-hoon in Albertville in 1992; Chae Ji-hoon in Lillehammer in 1994; Kim Dong-sung in Nagano in 1998 and in Salt Lake City in 2002; Ahn Hyun-soo in Turin in 2006; and Lee Jeong-soo in Vancouver in 2010 - but there is no one like that this year.

The men’s team has to be content with itself with whatever medals it can win, especially since it has to face Ahn, who is currently ranked No. 1 in the 500 meters, No. 2 in 1,000 meters and No. 3 in 1,500 meters, according to the International Skating Union.

“We [the team and Ahn] haven’t spoken with each other about the races,” Shin was quoted as saying to the Korean media on Saturday. “We just talked about the ice quality a couple of times after practices. Ahn obviously is one of the best contenders in every short track event, but we will just try our best.”

On Saturday, Lee Seung-hoon, who won silver in the men’s 5,000-meter speed skating event during the 2010 Olympics, failed to claim a medal in a disappointing performance.

Sven Kramer of the Netherlands successfully defended his 5,000-meter title on Saturday, smashing the opposition and the Olympic record.

Jan Blokhuijsen claimed silver, almost five seconds back, and Jorrit Bergsma won the bronze to help the much lauded Dutch emulate the medal sweep of the men’s 10,000 meter at the 1998 Nagano Games.

The medal ceremony, though, was the closest the two Dutch challengers got to Kramer, who clocked six minutes, 10.76 seconds to shave almost four seconds off the record he set en route to winning the title at the 2010 Vancouver Games.

“For sure I was the only guy who could lose this today,” the grinning 27-year-old told reporters at the Adler Arena after collecting his second Olympic gold medal. “I just lost two or three races in the last few years but that brought a lot of pressure for today.

“I didn’t expect it would come as easy as that, I think it was one of my best races ever.”

Kramer, buoyed by text messages of support from compatriot and soccer player Arjen Robben and watched by Dutch King Willem-Alexander, was roared on by his fans who did their best to make enough noise to cover for the number of empty seats at the 8,000 capacity stadium.

The Russian fans who did turn out found their voices in the seventh of 13 heats, as Denis Yuskov completed the 12-and-a-half laps in six minutes, 19.51 seconds to jump to the top of the time sheets.

Yuskov’s lap times were strong over the first half of his heat and Kramer, benefiting from the ice being prepared just before his skate, trailed the Russian before moving ahead with four laps remaining of the 10th heat.

With gritted teeth, he powered toward the finish to set a mark that proved unbeatable, clenching his fists upon crossing the finish line.

Bergsma was close in a fast 11th heat, where he benefited from a strong skate by Norway’s Sverre Lunde Pedersen as the two pushed Kramer’s time, before tiring over the finishing laps. Kramer can go one better than Van As when he takes part in the 10,000 meter on Feb. 18, an event he thought he won four years ago only to be told as he celebrated victory that he had been disqualified for a lane change mix-up.