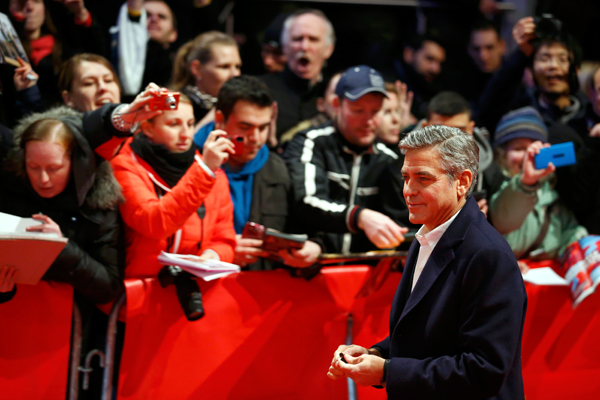 Cast member and director George Clooney smiles as he arrives on the red carpet for a screening of the movie “The Monuments Men” at the 64th Berlin International Film Festival in Berlin on Saturday. [REUTERS/NEWS1]

BERLIN - George Clooney whistled a tune and sang the praises of Belgian beer at the Berlin film festival for the international premiere on Saturday of his World War II art caper “The Monuments Men,” but reality had already given him publicity money can’t buy.

The premiere of the film, which has been released in the United States to mixed reviews, was one of the most anticipated events of the festival, where four German films are among 20 seeking the top prize.

But it was Clooney’s presence that created a huge queue of press to attend his news conference, where he also acknowledged that reality had caught up with his film right here in Germany.

The discovery last year of a huge trove of artwork in a Munich apartment has created a flurry of news about paintings and other treasures stolen or expropriated by the Nazis and still awaiting restitution to their rightful owners.

“We’ve had a long three-year conversation with the guys here at Fox [the film’s distributors] to get the news to hold the story,” Clooney joked, before turning serious.

“It’s a story that’s going to keep coming up because there’s still an awful lot of art still missing and will be found in lots of people’s basements. It just happened to be one rather amazing find, one and a half billion dollars.... It’s an amazing conversation to have, the responsibility of getting back the art to people,” he said.

Clooney, who enjoys clowning at festival events, was goaded by a questioner to whistle the theme to the movie, which she said was a quote of the cat theme from Sergei Prokofiev’s “Peter and the Wolf.” But in Clooney’s rendition, joined by co-star Matt Damon, it only seemed to have the first three notes in common.

Asked repeatedly why he’d chosen this story for one of his biggest budget movies, Clooney said the historical events had grabbed him, much like the war action stories of his youth. This one, he said, had an interesting twist.

“Hollywood does like a good World War II story, but this seemed like a story I didn’t know. It wasn’t a megapatriotic film but a chance to talk about a unique group of people who did something for the first time in the history of war, which is the victor didn’t keep the spoils, they gave it back.”

Striking a contrast with the festival’s first German entry “Jack,” a gritty contemporary family drama, director Graf’s “Beloved Sisters” depicts the 18th-century national hero and two sisters from the penniless aristocracy attempting to establish a loving “menage a trois” over more than a decade.

Schiller marries the younger of the two sisters, who have made a pact to share everything - including him - in an attempt to protect their idyll under the guise of convention.

But the elder sister, who is trapped in an unhappy marriage of convenience, increasingly realizes their naivety, and the equilibrium of their love triangle starts to become undone when the younger one becomes pregnant.

“The core of the movie is incredible tenderness,” Graf told a news conference, noting that he wanted to focus on their love rather than on Schiller as a famed writer and protagonist of the “Sturm und Drang” literary movement, together with Goethe.

Graf, who has of late directed more television than film, said he let his film sprawl out over more than two hours in order to capture the slower pace of that era.

“We wanted to avoid the impression that people were racing through the streets back then,” Graf said. “We would force an artificial speed, it would have falsified the whole thing.”