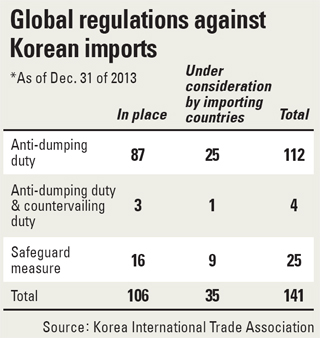 Developing countries are erecting tough barriers against Korean exports, according to a report by the Korea International Trade Association that was published yesterday.

As of Dec. 31, Korean products had been subject to antidumping duties, countervailing duties or safeguard measures 106 times, with 83 of those measure coming from 15 developing countries, the state trade promoter said.

In addition, 35 Korean products were being investigated for the possible imposition of trade barriers, including 27 cases in 12 developing countries, Kita said.

“In the past, most of the import regulations against Korean products were imposed by advanced countries, but in recent years, regulatory measures from developing countries have risen steeply in tandem with Korea’s growing exports to those countries,” said Je Hyun-jung, a research fellow at Kita’s Institute for International Trade who wrote the report.

China implemented 16 protection measures, followed by Turkey at nine, Pakistan at six, and Brazil, Thailand and Indonesia, all at five.

“As the economic jitters in developing countries have continued since the beginning of the year, most of the 35 cases being considered against Korea are happening in developing nations,” Je said. “We have to remain alert.”

Kita noted the increasing regulations against Korean imports in general. Of the 141 regulatory actions against Korean products that were already in place or being considered as of the end of last year, 34 cases were added last year. That level was about the same as the 32 actions leveled in 1982 and 36 in 2002, Kita said.