Head of OCA has high hopes for Asian Games in Incheon

Head of OCA has high hopes for Asian Games in Incheon 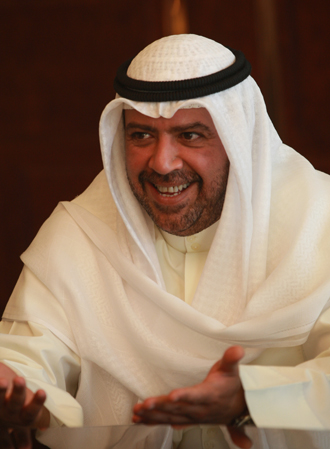 Ahmad al-Fahad al-Sabah, the president of the Olympic Council of Asia. Provided by Kim Min-je

One of the biggest goals this year for Ahmad al-Fahad al-Sabah, the president of the Olympic Council of Asia (OCA), is the success of the 2014 Incheon Asian Games in September.

The 50-year-old Kuwaiti sheikh, who is also the president of the Association of National Olympic Committees and a member of the International Olympic Committee (IOC), sat down for an exclusive interview last month with the JoongAng Sunday in Manila. He was there to attend the 45-nation OCA general assembly, which ran from Jan. 17 to 18.

“Sports are the greatest tools for reconciliation,” al-Sabah said at the Sofitel Philippine Plaza.

The sheikh normally shies away from the media, and this was his first interview with the Korean press.

The Asian Games, he said, is the most important out of all of the events the OCA holds. “Many different Asian cultures become one through the Asian Games.”

Known for his interest in and influence on sports relations, he also served in the Kuwait Army and heads the Kuwait Olympic Committee and its football federation.

He is close friends with current IOC President Thomas Bach and supported his election last September.

Despite initial concerns about holding the meeting in Manila following the devastating Typhoon Haiyan, which ravaged the Philippines last November, al-Sabah nevertheless pushed for the general assembly to be held in the nation.

In 1990, he became a member of the IOC, succeeding his father, Sheikh Fahad al-Ahmed al-Jaber al-Sabah, the founder of the Kuwait Olympic Committee, who was killed by Iraqi troops in August 1990 at Dasman Palace during the Saddam Hussein-led Iraq invasion of Kuwait.

He expressed his thanks.

“Sports surpass any wall put up by strife or fighting,” he said. “The IOC, along with the United Nations, stops wars by declaring an ‘Olympic truce.’?”

“In a region with diplomatic tension, like Asia, sports play a huge role that cannot be described in words,” he added. “[I hope] the Asian Games, held in Incheon, near North Korea, can tie us together as one.”

When asked to evaluate the progress of preparations for the 17th Asian Games, he responded that - as other problems have been sorted out - he hopes to see the remaining six months being dedicated toward doubly assuring its success.

Based on that, “[I anticipate] the Asian Games will be also be made into the best competition.”

The Asian Games - one of the world’s five largest sporting events, along with the Olympics - is expected to draw some 13,000 athletes and related officials from 45 countries, from Sept. 19 to Oct. 4 in Incheon. It is the third time Korea will host the event. The 1986 Games took place in Seoul, and again in Busan in 2002.

Al-Sabah added that he still fosters a close relationship with both Korean sports officials and politicians. “The Korean people, including President Park Geun-hye, are very friendly,” he said.

He noted that he was “moved by the cordiality” of President Park when he visited the Blue House last year and said he remembers the encounter “vividly and with gratitude.”

IOC members serve until age 70. Al-Sabah is expected to serve another two decades on the committee.