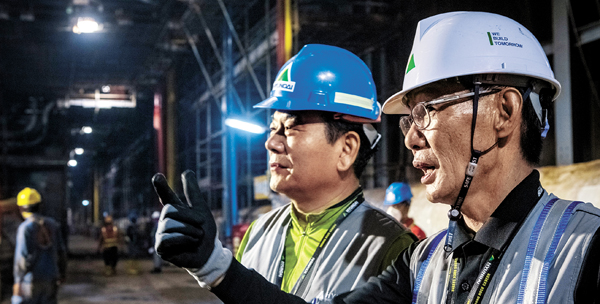 On a recent afternoon on Jurong Island, southwest of Singapore, Lee Jong-sung and Kim Jae-ryong step into an elevator, which transports them 150 meters (492 feet) deep underground.

For the two Korean men, who have a yearlong contract with Hyundai Engineering and Construction, this is all in a day’s work.

The ride lasts about 10 minutes, after which the two veteran Hyundai workers, both in their 60s, arrive inside a 27-meter high, 20-meter wide storage facility that houses five oil tanks.

Lee is overseeing the apparatuses that measure and keep track of oil flow, while Kim is responsible for making sure the metal structures that support the underground storage meet safety standards and are maintained.

The two men are technically retired from Hyundai, where they worked for more than two decades. Lee retired in 2006 after 28 years at the company but was rehired through a special employment program that recognized his in-depth expertise in the field.

Singapore is Lee’s second overseas post, after Saudi Arabia, following his re-employment six years ago. The same is true for Kim, who retired in 2008.

“It was a big struggle for us to have nothing to do after retiring in our late 50s. Especially considering the fact that we were once at the forefront of national industrialization [during the 1970s and ’80s],” Lee said.

Kim agreed with his colleague.

“We have in-field expertise stemming from years of experience, which you cannot just learn from textbooks,” he added.

“I’m really grateful that the company has recognized us for that.”

Like the two Hyundai workers, an increasing number of retirees in their 60s and 70s, known as the New Silver Generation, are going overseas to continue to work in their retirement.

Most New Silvers, those seniors between 60 and 74 years old, are eager to make use of their previous vocational expertise.

Some have even opted to do volunteer work in developing countries, teaching elementary school children for free as part of the state-funded Korea International Cooperation Agency (Koica).

According to the JoongAng Ilbo, a majority of the graying population who are re-employed overseas work on projects in the construction and shipbuilding industries, for which Korea is known.

“The number of overseas construction bids obtained by domestic companies has grown in large numbers in recent years, and that has led to growing demand for retired veteran engineers in their 60s,” said Kim Jong-sung, director of the human resources team at the International Association of Constructors in Korea.

“Companies will very soon seek to hire veterans in their 70s to use their expertise.”

In a JoongAng Ilbo survey of 10 construction firms that all won major overseas bids last year, the number of workers aged 60 and older and now dispatched abroad for the projects stood at 497 as of Feb. 2.

In 2012, the number of New Silvers abroad was 2,439 - more than double that of 2006, according to the Korea Seafarer’s Welfare and Employment Center.

Many seniors have also participated in volunteer aid projects offered by Koica, an institution under the auspices of the Ministry of Foreign Affairs that implements grant aid and technical cooperation to foster cooperative relationships between Korea and developing countries.

“I have noticed that children here are very eager to learn from me. It gives me great pleasure doing what I am doing here,” said Kim in a telephone interview.

Some officials have even suggested that the government and private companies should more actively seek New Silver Generation workers.

“The lump of labor fallacy - which postulates that an increase in the employment of seniors will invariably lead to a reduction in employment opportunities for the younger work force as a result of a fixed number of positions - has proven false,” noted Choi Sung-jae, a former labor and welfare secretary at the presidential office.

“Abrupt retirement for people in their 50s [who are not yet financially prepared to retire] could cause a variety of social problems. The government should think about implementing policies and incentives for companies to come up with senior reemployment programs.”