Korean women off to great start

Korean women off to great start 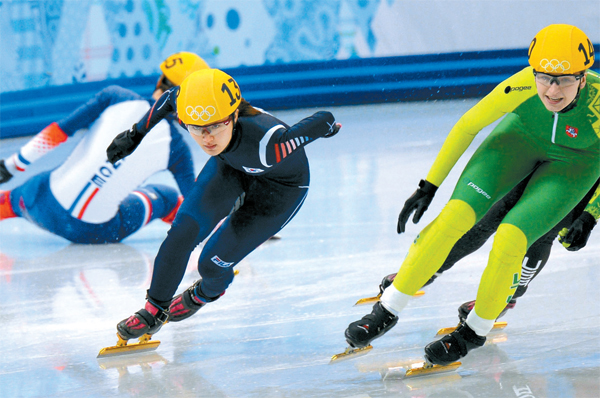 Park Seung-hi of Korea, second from left, leads the field during a heat for the women’s 500 meters on Monday at the Iceberg Skating Palace. [AP/NEWSIS]

SOCHI, Russia - The Korean women’s short track team got off to a good start, with all the skaters in the group round matches advancing to the quarterfinals yesterday.

Kim A-lang, the world No. 3 in the 500 meters during the 2013-14 season, advanced, despite being grouped with tough competitors.

Shim Suk-hee, 17, who is expected to win two or three short track medals, and Park Seung-hi, the world No. 4, also showed that they are in good shape.

In the preliminary round matches that started at 7:27 p.m., Kim was the first Korean skater. She advanced to the next round by finishing in second place in 43.919 seconds. She got off to a quick start against tough competitors such as Liu Qiuhong of China, who is the world No. 8 in the 500 meters this season. Liu won the group.

“Since it was the very first round, it was important not to make any mistakes,” coach Choi Kwang-bok said after the race. “Kim had a tough race because the Russian skater made two false starts, but I think she finished the round calmly.”

“I tried to get my rhythm back as soon as possible after the Russian’s false starts,” Kim said. “I will prepare for the next stage well.”

Park raced in the Group 4 match. By finishing in 44.19 seconds, the 22-year-old won the group and advanced to the quarterfinals.

Shim, the nation’s short track ace, appeared in the Group 8 match at 7:50 p.m. The world No. 5 in the 500 meters this season started late and was in last place until two laps to go, but after making a beautiful turn in a corner, she moved into second place and finished in that position in 44.09 seconds.

“I am satisfied with today’s race,” Shim said. “But I think I have to improve in making a quick start in a short-distance race like this one. I’m happy that all three of us have advanced to the next round.”

The Korean skaters will have their quarterfinals at about 7:05 p.m. on Thursday, Korea time.

Lee said her physical condition is better than ever, showing her confidence in the event. “Regardless of the outcome I would make, I will just try to focus on my race,” she said.

Along with Lee, Kim Hyun-young, Park Seung-joo and Lee Bo-ra will race in the same event.

“No one knows what kind of result Lee would have, but I can say that she is in perfect shape to win the Olympics,” said Kevin Crockett, the speed skating team’s coach.

In other events on Sunday, Germany’s newest luging lord, Felix Loch, locked up the men’s single luge title he won four years ago in Vancouver by easily beating a field of racers he left in his icy wake.

Loch completed four runs down the Sanki Sliding Center track in 3 minutes, 27.562 seconds - 0.476 seconds ahead of Russia’s Albert Demchenko, who won the silver in his seventh Olympics.

With IOC President Thomas Bach and German soccer great Franz Beckenbauer in attendance, Loch showed why there’s no one in his class. Not even close.

Loch began the second day of competition leading Demchenko by 0.294 seconds, a sizeable advantage in a sport in which the difference between podium and pedestrian can be the blink of an eye.

On his third trip down, Loch completed the 17-curve course in 51.613 seconds, bettering the track record he set on his second run a day earlier. It was going to take a major mistake for anyone to reel in Loch, but he was precise throughout his descent, staying away from the walls and trouble.

Demchenko, who won silver at the 2006 Turin Games, needed to find speed anywhere he could on his home track, but when he posted a time of 51.707 seconds, Loch’s lead had swelled to 0.388 seconds.

It was as good as over.

At that point, Loch only needed to stay upright during his last run to secure Germany’s 10th gold in 14 events since luge debuted at the 1964 Innsbruck Games.

He paddled down the start ramp, the spiked fingertips of his gloves digging into the slick surface. Loch stole one last look at the pristine ice before him before lying back and weaving his way to an easy victory. After crossing the finish line, he pumped both fists and let out a scream.

Demchenko was nearly as excited with his silver, and as he celebrated Russian fans chanted “Four more years!” in hopes he’ll keep sliding.

After winning five of nine World Cup events this season, Loch, whose father competed in luge for East Germany in the 1984 Olympics and passed on sliding secrets to his son, came to the Sochi Games expecting to win a second gold medal without much difficulty. It was his to lose.

Not only did Loch dominate, he outraced the field of 39 lugers so convincingly that he unintentionally embarrassed them.

There’s not another slider in his age bracket as talented or as driven as Loch.

And with the 42-year-old Demchenko and 40-year-old Zoeggeler nearing the finish lines of their stellar careers, Loch lacks a luging contemporary to challenge him and keep him on top of his game.