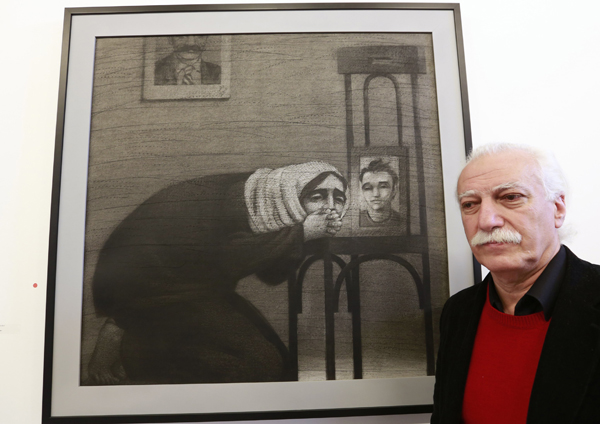 Syrian artist Youssef Abdelke stands near his artwork during an exhibition at a gallery in Beirut on Jan. 6. While activists and state journalists are out on the front line recording every shell blast and clash, Abdelke has found his own way of reporting on the hardships of his fellow Syrians, using charcoal and paper. [REUTERS/NEWS1]

BEIRUT - A woman curls up in grief in a darkened room - an artist’s image as powerful as any of the thousands of photos and videos from Syria’s civil war flashing across the world’s computer and television screens.

The sketch is the work of 63-year-old painter and illustrator Youssef Abdelke, who stayed on in his Damascus studio as scores of his contemporaries left to escape a conflict approaching its fourth year.

While activists and state journalists are out on the front line recording every shell blast and clash, the silver-haired Abdelke has found his own more personal way of reporting on the hardships of fellow Syrians, using charcoal and paper.

“I think all the works in one way or another try to express the concerns and emotions of the ordinary Syrian citizen amid this huge river of blood,” he told Reuters at a gallery in Beirut where dozens of his works were on display.

Many of them focus on small, intimate moments, rather than trying to make sweeping statements about a civil war that has killed 130,000 people, driven millions from their homes and devastated whole districts of Syrian cities.

A grieving woman bends over a portrait of her dead son.

A teapot rests on a chessboard, both common objects in many Syrian households. Two tea glasses nearby are splattered with red paint, as if they are bleeding from gunshot wounds.

“We need years and years of contemplation and work to arrive at the moment where one can touch the huge amount of tragedies. The killing and destruction is greater than one can easily absorb,” said Abdelke, a prominent name on the Syrian art scene.

“Right now we’re in the heart of the storm, so it’s very hard for one to see the true cultural effects in creative, artistic production.”

Abdelke has not shied away from taking on the authorities in the past.

This month’s exhibition is his first in Lebanon since he was imprisoned in Syria for a month last summer after signing a declaration demanding the departure of President Bashar al-Assad.

He was also held as a political prisoner from 1978 to 1980 under the three-decade rule of Assad’s father, Hafez al-Assad, and only returned to Damascus in 2005 from exile in France.

But many of the new works are abstract rather than overtly political.

A nail drives through a human heart. A knife cuts through a loose bouquet of flowers.

“The whole situation is an open-ended crisis,” said Abdelke. “It affects all civilians, even those who consider themselves outside of the conflict.”

Other Syrian artists have set up shop in Lebanon and Gulf Arab states, securing shows in boutique galleries in London, Paris and New York and fueling growing international interest in the country’s contemporary art.

Abdelke has also been touring the Middle East with his work. But he always returns, doggedly, to his base in Damascus.

Inside Syria, while art schools are still functioning and a few dozen artists keep up residences, Abdelke says exhibitions have become nearly impossible.

Cultural events like gallery openings and lectures are disappearing as routine violence overtakes much of the country, even the heart of the once safe capital.

“Exhibiting itself is very difficult,” he said. “And it doesn’t have any meaning because nobody comes.”