United ‘as bad as it gets’ after draw with Fulham

United ‘as bad as it gets’ after draw with Fulham 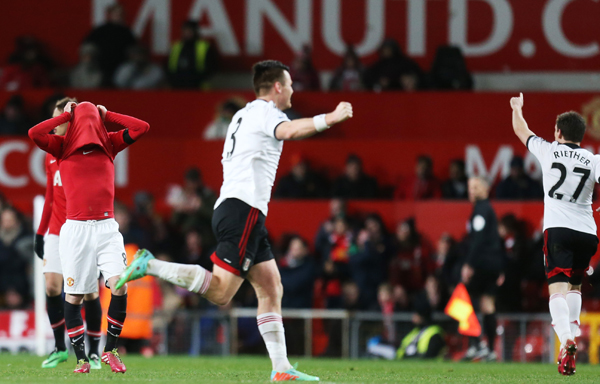 So often the beneficiary of late goals under Alex Ferguson, it seems everything is being turned on its head at Manchester United under David Moyes after his team’s latest stumble in the Premier League.

Deep into stoppage time at Old Trafford, Darren Bent plundered a goal in “Fergie Time” for Fulham to claim a 2-2 draw for the league’s worst team on Sunday.

And a miserable first season for Moyes just keeps on getting worse, with the champions adrift in seventh, after winning the title by 11 points under Ferguson in May.

“Today was probably as bad as it gets,” Moyes said.

But next up on Wednesday is a trip to Arsenal, which lost 5-1 at Liverpool on Saturday, but is second in the standings.

Even more agonizing for Moyes is that his team had turned the match around to be in a winning position. Trailing from Steve Sidwell’s 19th minute-goal, Robin van Persie and Michael Carrick scored rapid goals to put United 2-1 up going into the final 10 minutes.

United’s setback was compounded by Tottenham moving three points from fourth place on Sunday by dislodging Everton from fifth with a 1-0 victory over the Merseyside team.

While Tottenham is experiencing a revival after changing managers, there is little appetite at United to dismiss the man who succeeded Ferguson after 26 years.

Moyes will fight on, with the prospect of Champions League glory still in play, even if the squad doesn’t look capable of conquering the European football powers these days.

What made Sunday’s draw so galling too is that it was masterminded by Fulham manager Rene Meulensteen, who was Ferguson’s assistant at United until May, and is enduring even more misery than Moyes with his last-place team. How relieved Meulensteen was to see Lewis Holtby, a midfielder on loan from Tottenham, rampage down the left flank before sending in a cross that the advancing Sidwell slid into the net.

United was lacking a killer instinct in front of goal until it was almost too late. Juan Mata’s cross was turned in by Van Persie in the 78th, and Carrick’s shot deflected off Scott Parker into the net. In a game in which United sent in some 81 crosses to Fulham’s four, and goal attempts were 31 to six in the hosts’ favor, the points were shared.