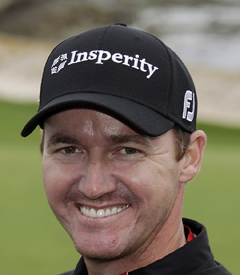 Jimmy Walker led by as many as six shots Sunday in the AT&T Pebble Beach National Pro-Am before he had to make a 5-foot par putt on the 18th hole for a 2-over 74 and a one-shot victory over Dustin Johnson and Jim Renner.

But it was a familiar outcome for Walker, a 35-year-old Texan who only four months ago was regarded as one of the best players to have never won on the PGA Tour. This was his third win of the PGA Tour season, a streak that began in October about an hour away at the Frys.com Open.

Walker joined some exclusive company. He is only the fourth player in the last 20 years to win three times in his first eight starts to a season. The others are Tiger Woods (who has done it eight times), Phil Mickelson and David Duval.

For a brief moment, it looked as though Walker might have a chance to join Greg Norman and Sergio Garcia as players to lose a six-shot lead in the final round.

He was never seriously challenged until Johnson, and then Renner, put together a strong finish. Johnson, a two-time winner at Pebble Beach, closed with a 66 on a card that included three bogeys. Renner, who had yet to make a cut all year, made five birdies on the back nine for a 67.

Walker made a 10-foot birdie on the 11th hole and was seemingly on his way.

From 25 feet above the hole, he hit the birdie putt too hard and had one anxious moment.

Walker finished at 11-under 277 and earned $1.188 million, expanding his lead in the Ryder Cup standings to more than $1 million over Mickelson, who is in second place.