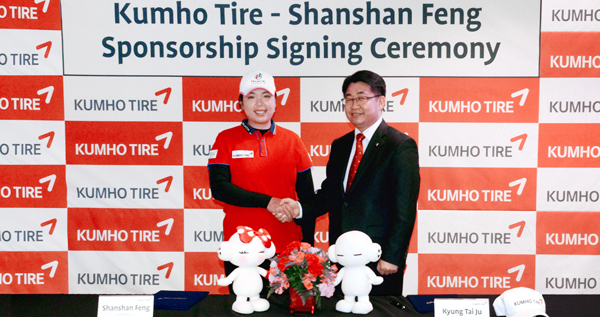 Kumho Tire, the nation’s second-largest tire manufacturer, said yesterday that it has signed a sponsorship agreement with Chinese professional golfer Shanshan Feng in an effort to boost its sports marketing.

Kumho Tire said it will be Feng’s official sponsor for three years until January 2017. The agreement was made Saturday in Orlando, Florida.

“She goes well with the dynamic and innovative brand image of Kumho Tire,” the company said in a statement. “Kumho Tire is planning to prepare a foothold to increase its global brand value through sponsoring Shanshan Feng.”

As her official sponsor, Kumho Tire has secured the rights for television advertisements in China using Feng’s image and is entitled to specific marketing activities, including invitations to events like the Kumho Tire Ladies Open. “I’m certain that I will have good results this year together with Kumho Tire,” Feng said. “With the support of the fans and through my efforts and passion, I am going to demonstrate that I can rise to the top of the world.”

Kumho Tire also signed a sponsorship agreement last year with Jang Ha-na, who won the Order of Merit title in the 2013 LPGA of Korea Tour and is currently No. 14 in the Women’s World Golf Rankings.