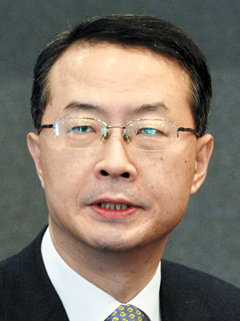 Asiana Airlines’ new President and CEO Kim Soo-cheon has declared that this year will be a “second start-up” for the nation’s second-largest air carrier, which is looking for a fresh start after poor earnings and a fatal accident last year.

Kim, who succeeds former CEO Yoon Young-doo, has been with Asiana since its start in 1988. He was inaugurated CEO of Asiana’s low-cost carrier Air Busan from 2008 before returning to lead the flag carrier this year.

The 58-year-old CEO said he wants to manage the company as if it was starting all over again, trying to bring a new atmosphere following last year’s fatal crash in San Francisco and poor business performance.

“I always remember the feeling of a start-up as I went through the start of both Asiana and Air Busan in the past,” Kim said in a press conference at the Plaza Hotel, central Seoul, yesterday. “I realize the purpose of starting a business is to lay out a foundation for sustainable growth and development.”

Asiana last year posted an operating loss of 11.2 billion won ($10.4 million), a 190.6 billion won drop from a year before. Its sales plunged 2.8 percent year-on-year to 5.72 trillion won. The company blamed the weak yen and deteriorated relations between Korea and Japan, a major destination.

The affiliate of Kumho Asiana Group aims for sales of 6 trillion won this year and operating profit of 180 billion won. Kim said that the company will achieve this goal by reinforcing its long haul flights.

“We will bring two A380 passenger jets from Airbus in May and June, and operate those planes from July starting with the Incheon-LA route,” Kim said. “We are planning to have large-size jets to account for 60 percent of our total fleet in the future.”

For medium and short flights, which are becoming the most competitive market with the rise of low-cost carriers, Kim said he will benchmark some of their strategies.

While improving profitability is one goal, Kim said his real task will be improving the airline’s safety culture and that all employees are focused on this issue following the fatal accident last July. “The company is putting all of our efforts into build a perfect safety culture,” Kim said.