Abe turns toward Russia amid souring ties in Asia

Abe turns toward Russia amid souring ties in Asia 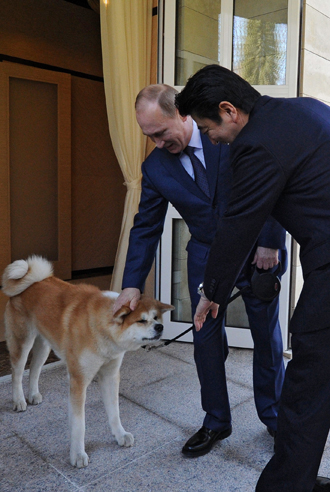 Russian President Vladimir Putin and Japanese Prime Minister Shinzo Abe pet during a meeting in Sochi, Russia, Saturday Yume, an Akita that was gifted from Japan in 2012 as a symbol of gratitude for Russia’s assistance following the earthquake and tsunami in 2011. [AP/NEWSIS]

Japanese Prime Minister Shinzo Abe headed to Sochi over the weekend to attend the opening of the 2014 Winter Olympics, where he got chummy with Russian President Vladimir Putin amid souring relations with Seoul and Beijing, his closest Asian neighbors.

The two leaders met on Saturday at the Presidential Palace in Sochi, where they discussed moving up talks on a bilateral territorial dispute over the Kuril Islands, which have been under Russian jurisdiction since World War II.

Abe said at a press conference afterward that they are expecting to hold a bilateral summit meeting in Tokyo in the fall, which would be the first time a Russian president has visited Japan in four years. The two also plan to meet before then at a Group of Eight industrial powers summit this summer in Sochi.

Abe also said that Russia and China must finish the peace treaty, which was not realized after World War II because of the dispute over the four islands, which are located off the coast of Japan near Hokkaido.

Abe said the issue “should never be left to the next generations.” Japan also has territorial disputes with China and Korea.

As a sign of friendship, Putin showed up in Sochi with his dog Yume, a two-year-old Akita that was gifted from Japan in 2012 - a symbol of gratitude for Russia’s assistance following the devastating earthquake and tsunami that ravaged the island nation in March 2011.

Experts state that while Japan strengthens its alliance with the United States, it is also focusing on other independent diplomacy efforts.

“While it is true that the U.S.-Japan alliance is the foundation of Japan’s foreign policy, Japan - even from before - has a tendency to put efforts toward independent diplomacy in dramatic circumstances,” Bong Young-shik, a senior researcher and director of the Center for Foreign Policy at the Asan Institute for Policy Studies, said on Sunday. “In order to establish a stronger Japan, it will move toward active diplomatic relations with the U.S. alongside independent foreign relations.”

Japan’s TV Asahi reported that “Prime Minister Abe was originally not keen on attending the opening of the Winter Olympics.” However, following Abe’s visit to the Yasukuni Shrine last December, there were Russian officials that questioned why it should cooperate with Japan over the Kuril Islands, “so he changed his mind.”

Chinese President Xi Jinping also met with Putin on Thursday, where they agreed to jointly commemorate the 70th anniversary of the end of World War II next year.

The occasion is a sensitive event, particularly amid nationalistic moves by Japan, including Abe’s visit to the Yasukuni Shrine, and its denial of its wartime aggressions. Xi and Putin also reportedly expressed concerns regarding Japan’s denial.

The Russian Foreign Ministry said afterward that Putin plans to visit China twice this year, in the spring and again in the fall.

Abe and Xi did not exchange greetings at the opening ceremony of the Olympics, however, despite the fact that they were seated about 40 seats apart. Beijing and Tokyo are currently embroiled in a dispute over the Senkaku Islands, which China calls Diaoyu, as well as other historical and territorial tiffs. Both Xi and President Park Geun-hye have rebuffed a summit with Abe, consequently.

During the Games, Xi also met with Kim Yong-nam, chairman of the Presidium of North Korea’s Supreme People’s Assembly, on Friday, as Pyongyang appeared to be trying to improve its ties with Russia. Kim headed a North Korean delegation attending the opening of the Sochi Winter Olympics, even though no North Korean athletes qualified for the Games.

No Chinese media coverage on Xi and Kim’s meeting was available until the talks were reported yesterday, pointing to a possible media restriction.

“This is a key example of China showing dissatisfaction following the execution of Jang Song-thaek [the powerful uncle of North Korean leader Kim Jong-un],” a Beijing source told the JoongAng Ilbo, “and it will take some time for relations between the two countries to normalize.”

The Rodong Sinmun, the newspaper mouthpiece of the regime, reported on Saturday that Kim Yong-nam conveyed greetings by North Leader Kim Jong-un to Putin and met with Russian officials, including Vice Foreign Minister Igor Morgulov. The Korean Central News Agency said that Kim Yong-nam also spoke with the leaders of Mongolia, Kazakhstan and Armenia, as well as Ban Ki-moon, the secretary general of the United Nations.