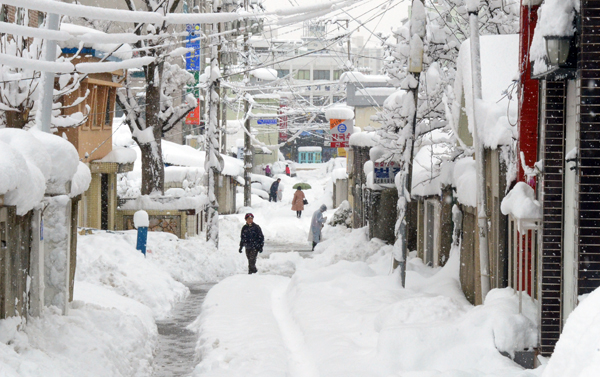 Pedestrians walk along a road covered with deep snow in city of Gangneung in Gangwon yesterday, which was pelted with 71.5 centimeters (28 inches) of snow from Thursday to 5 p.m. yesterday. [NEWS1]

For four days in a row Gangwon Province and the east coast were hit with heavy snow, with some towns receiving more than 80 centimeters, or 31.4 inches, of snowfall.

From Thursday through yesterday, as of 5:00 p.m., Goseong County on the East Sea was hit by the most snow with 88 centimeters, while Gangneung was blanketed by 71.5 centimeters.

The state-run Korea Meteorological Administration predicted yesterday that snow would continue until tonight in North Gyeongsang and Gangwon, bringing up to 30 centimeters more of snowfall during the day.

With more snow expected today, a heavy snowfall warning was issued for a number of cities in Gangwon as of 6 p.m. yesterday, including Gangneung, Donghae, Taebaek and Sokcho.

The snowfall caused classes to be suspended at 41 elementary, middle and high schools in Gangwon Province today and disrupted 31 bus lines, isolating some rural towns in the province.

“Nearly 140 centimeters of snow fell on the entranceway to my house from the street, trapping all three family members in the house all day long,” said Joo Do-gyung, a resident of Goseong County, Gangwon, in a phone interview.

Meteorologists cautioned people in the areas to drive safely, noting there had been 18 traffic accidents related to the snow over the weekend.

Yet even more snow is expected later in the week in Gangwon, according to the weather agency, which predicts snow or rain will fall on Friday and Saturday.

The Jeolla and Gyeongsang regions are also expected to have either snow or rain Friday and Saturday.

Seoul, meanwhile, had 3.3 centimeters of snow over the weekend as of 7 p.m. yesterday, and no more snow is expected until Feb. 19, along with Incheon and Gyeonggi.

The weather agency forecast temperatures in Seoul to reach as high as 7 degrees Celsius (46 degrees Fahrenheit) this week, slightly above the usual for this time of year.