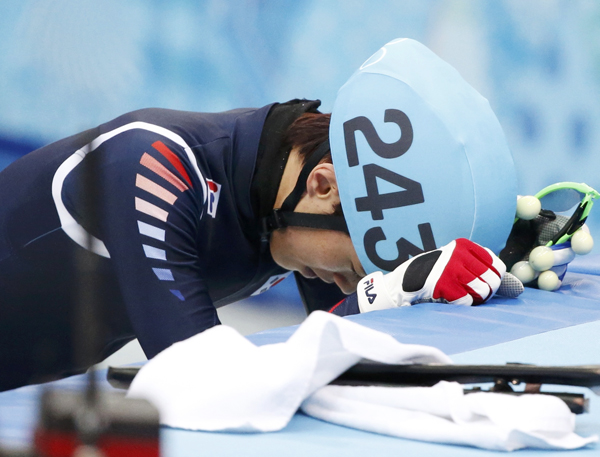 Shin Da-woon of Korea reacts after he crashed in the men’s 1,500-meter short track speed skating semifinal event at the Iceberg Skating Palace on Monday. [REUTERS/NEWS1]

Early struggles in events that were considered good chances to win medals have put a major hitch in Korea’s quest to finish top 10 in the standings at the Sochi Winter Olympics.

Thanks to those losses, Korea’s best chances at earning medals now depend on its female athletes, such as figure skater Kim Yu-na and the women’s short track racers.

In the men’s 500 meters speed skating that was held on Monday night at Adler Arena, the 2010 Vancouver Olympics Champion Mo Tae-bum took to the ice with hopes of winning the country’s first medal in Sochi.

By finishing the first race in fourth, at 34.84 seconds, he raised anticipation that a strong showing in the second race could move him into medal contention; however, in the second race, he again finished in fourth place, at 34.85 seconds, and missed the podium.

However, the Netherlands dominated the 500-meter race, taking all three medals, just like they did in the men’s 5,000 meters speed skating on Saturday. Michel Mulder won the 500-meter gold by finishing the two races with a combined 69.312 seconds, followed by Jan Smeekens with 69.324 seconds and Ronald Mudler with 69.46 seconds.

Mo’s combined time of 69.69 seconds was actually 0.13 seconds faster than when he won the Vancouver Olympics, but that wasn’t good enough this time.

Mo lost the event in the first 100 meters of the races. In the first race, his 100-meter time of 9.68 seconds was the slowest of the top five skaters. He improved by 0.05 seconds during the start of the second race, trailing the fastest skater by just 0.1 seconds. However, since the speed skating event can be determined by even 0.001 seconds, the gap with the other competitors was too much to overcome.

“It wasn’t a bad race for Mo but wasn’t a good one either,” said analyst Jegal Sung-ryeol. “I think Mo felt a lot of pressure to win a medal since the country hasn’t won any yet. I was surprised by Smeekens’s race because he was only the world No. 7 before the Olympics. I think winning all the medals in the 5,000 meters greatly impacted the entire Netherlands team. They have been in a good mood since then.”

Mo will compete in the 1,000 meters, in which he won silver in Vancouver, tonight at 11 p.m. Korea time.

Earlier in the day, the men’s short track team suffered a nightmare in the 1,500-meter race at the Iceberg Skating Palace. Three skaters advanced to the semifinals without a problem. But, in a semifinal race featuring both Lee Han-bin, 26, and Shin Da-woon, 21, the Korean athletes crashed in the very last lap after leading the race.

Shin felt that he was in the lead and Lee collided with him from behind. But the judges said otherwise, allowing Lee to advance. However, it did Lee little good because he finished the final race in sixth place with a time of 2:16.466 seconds.

Park Se-yeong didn’t even make it to the final. He completed his semifinal race in third after bumping Ahn Hyun-soo, now Russia’s Viktor Ahn.

To top things off, the Koreans had to see their former teammate Ahn celebrate winning a bronze medal under the Russian flag. It was Ahn’s first Olympic medal in eight years and Russia’s first medal ever in short track at the Olympics.

When Ahn appeared on the rink with a Russian flag, audiences filled the rink as they cheered “Viktor! Viktor!”

“People keep asking me how do I feel when I see Korean athletes, but I’m totally fine with them. I’m just happy that I am healthy and can skate again in the Olympics.”

But Ahn was not the only one to punish Team Korea.

“Korea used to have one major superstar on the team in previous Olympics, but I don’t see one in Sochi,” said Apollo Anton Ohno, an NBC commentator and longtime Korea nemesis, according to a Korean media report. “If I was a gambler, I would bet on Ahn or athletes from other countries, including Canada and the United States.”

As the men’s team struggles in short track, hopes are now on the women’s team, led by 17-year-old star Shim Suk-hee. Her favorite short track events are the 1,000 meters and the 1,500 meters.

Wang Meng of China, the strongest contender in those events, will not be competing due to injuries, but Shim still has some tough competition, including Zhou Yang of China, who won gold medals in the 1,500-meter and 3,000-meter relay in Vancouver.

The Korean women’s team on Monday advanced to the finals in the 3,000-meter relay.

“It is embarrassing that the country hasn’t won any medals so far,” said a spokesman for the Korea Olympics Committee. “It seems like the female athletes need to lead the rest of events, like the male athletes did with some surprising medals in Vancouver’s speed skating and short track events.”

Other than speed skating, expectations are getting higher among Korean fans to see Kim Yu-na win two consecutive Olympics in figure skating. She has been looking good in her two most recent competitions - one in Croatia in December and one in Korea in January - but several competitors are also looking strong, including Mao Asada of Japan and Yulia Lipnitskaya of Russia.

The short program begins at midnight on Feb. 19 with the free skate coming the next day.

“You never know what will happen in sports, but so far the results are way below our expectations,” said analyst Kim Kwan-kyu. “I hope our athletes can overcome the pressure and get some wins.”