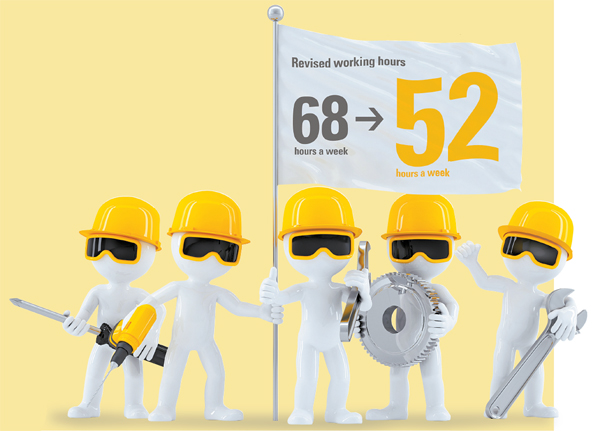 As the revision of the Labor Standards Act approaches, which will reduce the maximum weekly working hours from 68 to 52 starting in 2016, concerns are rising that the plan could fail like France’s Aubry law because it lacks details on setting wages and maintaining productivity.

According to the Ministry of Employment and Labor, the revision of the Labor Standards Act is expected to be approved by the National Assembly this month as the government and political parties are close to agreeing on the issue.

“The Ministry of Trade, Investment and Energy were negative about reducing working hours in case it hurt the business of small and medium enterprises, but recently differences between ministries were adjusted,” a high-ranking official from the Labor Ministry told the JoongAng Ilbo on Friday. “Since this was an important government task, the revision will be passed by the National Assembly this month.”

Currently, the maximum number of weekly working hours is 68, which includes overtime work of 12 hours and holiday time of 16 hours.

The revision says that working on holiday time should be regarded as overtime work, knocking that extra 16 hours out of the equation and reducing maximum working hours to 52. The decision stemmed from recent Seoul and Daegu high court rulings saying that holiday time work is overtime work.

The new regulation is expected to go into effect in stages depending on the size of the company. Under the revision proposal from the ruling Saenuri Party, companies with more than 300 employees must comply with the rule from 2016, those with 30 to 300 employees from 2017, and those with less than 30 workers from 2018.

However, since the new regulation could reduce the productivity of SMEs, the proposal also includes a leniency period. If a company and its labor union agree, the employees will be able to work 60 hours per week for six months.

The details of the leniency period and the timing of when the revision goes into effect is still to be discussed with the main opposition Democratic Party, although the DP has said it is willing to speed up the revision.

“The revision was discussed by the legislative subcommittee of the National Assembly’s Environment and Labor Committee on Feb. 18,” DP lawmaker Han Jeoung-ae said.

“Although there are a few differences between the ruling party and the opposition party, we will be able to resolve the issue.”

The government has been emphasizing that reducing working hours is a key to achieving its goal of attaining an overall employment rate of 70 percent because shorter working hours will create more jobs; companies will need to hire people to make up the working hours.

“The improvement of working culture is not only helpful to companies and employees but also beneficial to the country as a whole,” said Phang Ha-nam, minister of employment and labor, during a meeting with 40 SME CEOs at the Korea Federation of Small and Medium Business (Kbiz) on Friday.

According to data from the Labor Ministry, a Korean worker worked an average of 2,092 hours in 2012, nearly 400 hours more than the average worker in an Organization for Economic Cooperation and Development (OECD) country.

A report from the Occupational Safety and Health Research Institute (Oshri)? said employees working more than 52 hours a week have 2.7 times more chances of becoming depressed or developing an anxiety disorder.

However, the business world is opposed to the shorter workweek. According to data from the Korea Employers Federation (KEF), the move would generate at least 7 trillion won ($6.5 billion) in extra costs annually for Korean companies.

“Like nuclear reactors and blast furnaces, the plastic business runs plants that need to be operated 24 hours a day,” said Cho Bong-Hyeon, chairman of the Korea Federation of Plastic Industry Cooperatives.

“If working hours are reduced, we will have to increase our work force by 50 percent. How can we get that new work force and accommodate the rising costs?”

Analysts say the real problem is that there was no substantial discussion about wages or productivity when the working hours issue was decided.

A tripartite consultative body of labor, management and government hasn’t talked much about this issue as the Federation of Korean Trade Unions and the Korean Confederation of Trade Unions, the top two biggest labor unions in Korea, haven’t returned to the negotiation table.

Korea’s hourly labor productivity was only 67 percent of the OECD average and only 49 percent of that of the United States in 2011.

Critics say that the government is just pushing ahead thoughtlessly.

“If there is no flexible employment system and a revision of wages focusing on productivity, we can see a situation in which the law and the real world move in different directions,” said Lee Ji-man, a business administration professor at Yonsei University.

“Reducing working hours doesn’t increase the employment rate, and this has been proven by countries like France and Germany.”

In 2000, France reduced legal weekly working hours from 39 to 35 after the initiative was pushed by its Minister of Labor Martine Aubry, which is why the legislation is known as the Aubry law.

The law is considered a failed policy because it didn’t result in an increase in employment. France was then forced to boost the legal maximum of overtime work a few years later.

Critics in Korea say that the government’s plan could end up like France’s. The government set aside 2 trillion won in its budget for reducing working hours. This money will be used to support wages and investment in facilities.

In fact, Korea already followed in France’s footsteps when it reduced basic weekly working hours from 48 to 44 in 1990, and to 40 in 2004 with wages standing still. The employment rate didn’t change much.

Critics also say that Korea should look at the example of Germany, which also pursued reducing working hours but reduced wages at the same time.

For Germans, the purpose of cutting working hours was to maintain employment when the economy was sluggish rather than create new jobs.

Korean employees are likely to see a drop in compensation because there will be no allowances for holiday work under the revision. As of 2010, the holiday work allowance accounted for 13.26 percent of workers’ total compensation.

Industry insiders said conflict between labor and management seems inevitable as unions will not want to see compensation go down.