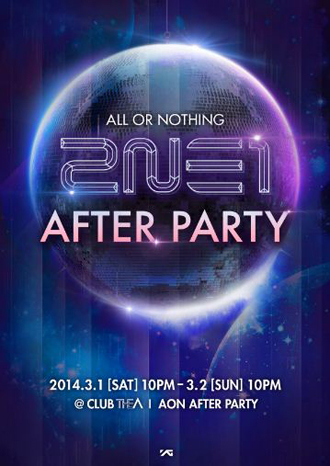 Girl group 2NE1 will hold after-parties for fans who are age 19 and over to get the fever going for the group’s second world tour.

A poster reading “All or Nothing 2NE1 After Party” was uploaded on the homepage of YG Entertainment, the girls’ agency, yesterday.

The tour is scheduled for March 1 and 2 at Olympic Hall, southwestern Seoul.

The doors for the after-parties will open at 10 p.m. on both days of the tour at “The A,” a club in Yeoksam-dong, southern Seoul. Members of 2NE1 will attend the parties.

So far, 17 performances have been announced in nine countries, including Korea, Japan and China.