Julia Moon, 51, is the director of the Universal Ballet, which celebrates its 30th anniversary this year. By Jeon Ho-seong

If you think K-pop and TV dramas are all there is to the Korean wave, think again. Ballet has been a major cultural export for about 15 years already. Many Koreans are principal dancers at renowned ballet companies around the globe while shows by Korean ballet companies abroad are often performed in front of sold-out crowds. In Japan, the newly coined word “ballet-dol” was created to refer to Korean dancers as handsome as pop star “idols.”

And at the center of the Korean ballet boom is the Universal Ballet Company, which will celebrate its 30th anniversary this year.

Universal Ballet was established in 1984 as the first private ballet company in Korea. Ever since, it has been one of the country’s two most prominent ballet companies, along with the Korea National Ballet. Universal had its first show abroad a year after its establishment and has been holding regular tours around America and Europe since 1998. Its “Shim Chung,” which was created specifically for global stages, has been staged more than 200 times in 10 countries. Many of the popular ballerinos in Japan are from the Universal Ballet Company. Last year, 15 Japanese students came to Korea to attend short classes organized by the company.

The 30-year history of the Universal Ballet is inextricably linked to the last 30 years of Julia Moon (also known as Moon Hoon-sook), the director of the ballet company. As one of its founding members, the 51-year-old ballerina was the first Asian person to become guest principal at Russia’s Mariinsky Ballet Company.

To learn more about “ballet Hallyu,” the JoongAng Sunday, an affiliate of the Korea JoongAng Daily, recently sat down with Moon.

“Dancers who were able to pull off diverse dance techniques were especially viewed favorably,” said Moon. “I was told that in Japan, there are not many ballet companies that are able to digest a mix of classic and contemporary dance. One of the ballet fans told me after the two-day show in Japan that he used to hate Jiri Kylian’s work, but after watching our performance he now understands Kylian’s intentions. Ever since our Japanese agency began promoting ballet from Korea via Hallyu media outlets, Japanese people who had never been to a ballet performance began enjoying it.”

Moon added that the ballet company picked four Japanese dancers as trainees. “When we think about Lim Sung-nam, who served as the first director of the Korea National Ballet, we know how astonishing Korean ballet is. She was trained in Japan, but now we are training the Japanese dancers,” said Moon.

Moon was straightforward and easygoing during the interview. While talking about her ballet company, she didn’t hesitate to acknowledge its achievements, without overstating its success.

Although it seems like Universal Ballet aimed to go global to promote ballet from Korea, Moon said that, in fact, the international strategy arose because “there was no market in Korea.”

“Even though the dancers practice 365 days a year, it’s the actual performance that makes the dancers grow,” said Moon. “We had to go abroad, and I believe if we hadn’t, our dancers wouldn’t have developed into such talented dancers,” Moon said.

Regarding the troupe’s 30-year history, Moon said the turning point for Universal was getting connected to the Mariinsky Ballet Company. After inviting the artistic director, Oleg Vinogradov, in 1992 and successfully staging “Swan Lake,” all the classical repertoires of the Universal Ballet Company have passed through Vinogradov’s hands. 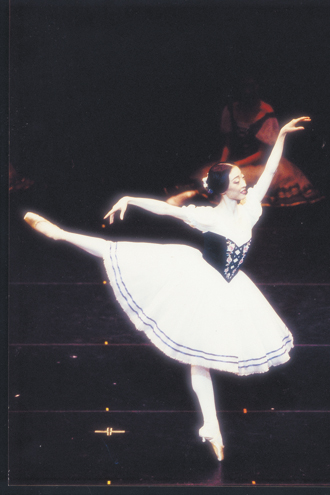 As a performer, Julia Moon was famous for her interpretation of Giselle. Provided by Universal Ballet Company

“That connection, I believe, is why the Universal Ballet Company exists today,” said Moon. “Every time we staged a work, the level of the company leaped. It’s like directly importing the masterpieces from their country of origin.

“In ballet, it’s important how details are delivered from the teachers to students,” added Moon. “Thanks to the teachers from Russia who stayed at the company 20 years ago, dancers back then were able to learn from them, and those dancers are now the teachers to today’s dancers. That’s how we have been able to maintain our style for the past 30 years.”

Although Moon believes her ballet company has attained a world-class level, they have yet to create a distinguished repertoire of its own.

“Samsung in Korea used to be a follower, and now it is a leader,” said Moon. “For them to maintain that position, they have to constantly come up with new creations. Just like Russia managed to transform from being a country that imported ballets from Italy and France to a country that gives to the world ballet, it’s time for Korea to bring out our own creations with our own choreography. We have to take to the world stages with our own work to go to the level where other countries import our work.”

Universal Ballet is working on its own pieces. The company created “Chunhyang” in 2007 and plans on staging it again this September. Based on a Korean folktale, “Chunhyang” came from “Dance, Chunhyang,” a dance piece created by Bae Jung-hyu, the former artistic director of the Korea National Ballet. However, “Chunhyang” was criticized for being too abstract, and Moon said she’s recreating it to make it easier to understand for those who don’t know the original tale.

Universal Ballet has a new creation on the way next year, a reinterpretation of a classical ballet as a contemporary one. Moon says the final task of Korean ballet companies is to create Korean choreographers.

“So far, we couldn’t foster Korean choreographers even if we wanted to,” said Moon. “Choreographers have to have diverse experiences around the globe. If you look at George Balanchine at the New York City Ballet or Kenneth MacMillan of the Royal Ballet or John Cranko of the Stuttgart Ballet, great choreographers existed in those ballet companies when they were taking to world stages.”

Moon has been referred to as “Korea’s Giselle” since she took the iconic role of a peasant girl whose love transcends death at the Mariinsky Ballet in 1989, receiving seven curtain calls in one show. “I think I’m somewhat like Giselle in terms of personality,” said Moon.

Her life also parallels Giselle’s - she famously married the spirit of her fiance, the son of Unification Church founder Moon Sun-myung, after the son died in a traffic accident in 1984. She was a soloist at the Washington Ballet at the time, but had to come back to Korea, then a “wasteland of ballet,” to marry the spirit of Moon’s son and help start the Universal Ballet. “My life was totally based on obedience,” recollected Moon.

Moon decided to retire as a dancer in 2011 after an injury. Since then, Moon says she’s been running around, trying to popularize ballet in Korea. She tried staging a ballet musical, providing subtitles so audiences could understand better, and tried teaming up with restaurants for “brunch ballet.” But she says the “Ballet with Commentary” programs, in which Moon explains the performance and some of its techniques prior to the show, has been more successful at building audience appreciation.

“I thought deeply about what audiences who are not too familiar with ballet would most wonder about when watching a ballet performance,” said Moon. “I didn’t expect it to be so well-received, but it was and I’ll continue to provide commentaries myself before our shows until I find someone else who can replace me.”