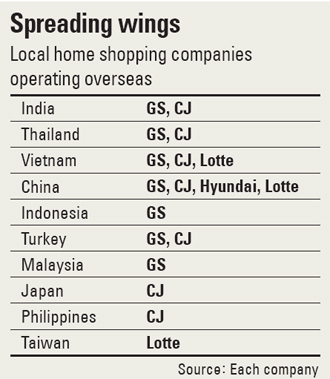 GS Home Shopping, a retail unit of GS Group, said yesterday that it has signed a contract with Astro Malaysia Holdings, the largest pay-television operator in the Southeast Asian country, to establish a joint home shopping company.

The signing event to set up Astro GS Shop with Astro Retail Ventures, an affiliate of Astro Malaysia Holdings, took place yesterday at its headquarters in Kuala Lumpur.

“It [Astro Malaysia Holdings] has exclusive business rights to satellite pay television service,” said an official from GS Home Shopping. “We feel it is the best partner [for us] when it comes to the home shopping business.”

Astro Malaysia Holdings is one of Malaysia’s leading media groups and is engaged in pay-television, radio, and digital media businesses. It has around 4 million households as viewers.

Of the total $21.9 million capital for the joint venture, GS Home Shopping will invest $8.76 million and will own 40 percent of shares.

“[Malaysian] consumers don’t have that much experience in home shopping,” the official said, noting there’s high potential for growth. “The per capita GDP in Malaysia is relatively high - $10,452 as of 2012 - and the number of households subscribing to satellite television operated by Astro is increasing. The level of basic infrastructure in the country, like electricity and telecommunications, is also advanced, and we expect home shopping to take root.”

According to the Korean company, there is currently only one specialized channel for home shopping in Malaysia, called TV Direct, although “informercials” run between television programs.

The joint venture will start running its home shopping channel in the second half of this year.

Products sourced from both Korea and Malaysia will be sold.

Last year, the company had sales of more than 600 billion won ($559 million) from its overseas home shopping businesses. This year, it aims for 900 billion won, and by 2015 more than 2 trillion won.