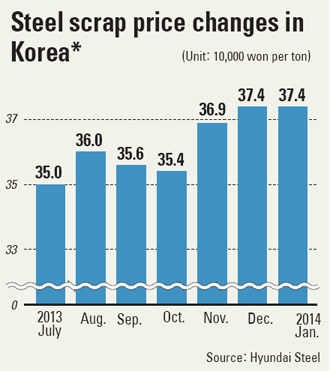 Hyundai Steel, the nation’s second-largest steelmaker, said yesterday it is adopting a new pricing system for its steel bar products in order to boost profitability.

According to the company, steel bar prices in Korea have been set after customers used steelmakers’ products. Hyundai Steel said it is switching to the normal retail standard from today, and will set the price first and then supply the steel bars to customers.

Hyundai Steel, the affiliate of Hyundai Motor Group, said it will conduct thorough analyses on global raw material prices and the supply situation of steel bars to determine the price in each quarter.

“We hope the new quarterly fixed-price system will create a healthy trading culture in the industry,” the company said in a release.

According to Hyundai, the previous pricing system caused frequent friction between the supplier and customers, which are mainly construction companies. Because of a slump in the construction industry, the steelmaker claimed it hasn’t received payments from its customers since last September because price negotiations continue to drag on.

According to the company, the average price of D 10-millimeter steel bars was 841,000 won ($780) per ton in March 2012, but fell to 720,000 won per ton in August 2012. The company said even though there were increases in the price of raw material and electricity, it couldn’t pass those along in the retail price.

In particular, the price of iron scrap, which is used for making steel bars, increased by 24,000 won per ton since last July, industry insiders said.

“Steelmakers and some retailers have posted operating losses because they couldn’t reflect the increased production costs in the retail price,” an official from the Korea Iron and Steel Association said. “It is a situation in which preserving profitability by increasing retail prices is needed.”

Construction companies countered that steelmakers were slow to lower their prices when raw material costs went down, but were quick to increase prices. They claim a rise in steel bar prices will be a burden amid an industry slump.

Meanwhile, despite its sales volume reaching a record 16.4 million tons last year, Hyundai said that it posted sales of 12.81 trillion won, down 9.3 percent from a year earlier, while its operating profit slipped 17.7 percent year-on-year to 716.6 billion won.

For this year, the company aims for revenues of 16.3 trillion won while selling 19.7 million tons of products.