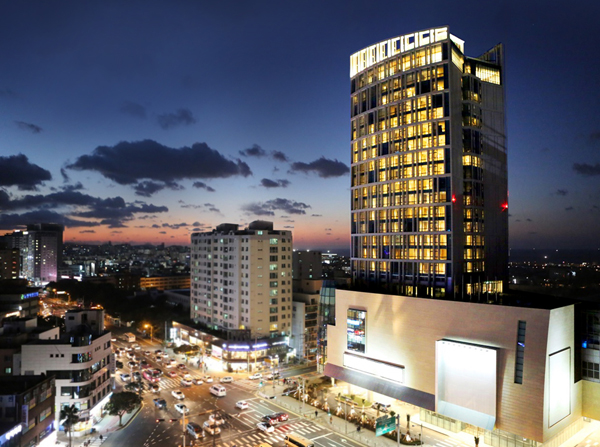 A view of Lotte City Hotel Jeju, which is slated to open on Feb. 25 in Yeon-dong in Jeju City. Provided by the hotel

As the number of foreign tourists visiting Jeju Island continues to surge, business opportunities are booming for hotels there. Yesterday, Lotte Hotels and Resorts, the hospitality arm of Lotte Group, announced the details of its 22-floor business hotel opening in Jeju City on Feb. 25, while E-Land Group, a fashion and retail conglomerate, also announced details of its 5-star hotel that will open in March.

Although the two hotels are targeting very different demographics - business travelers for Lotte’s hotel and luxury-accommodation vacationers for E-Land’s hotel - both openings reflect the growing number of visitors going to Jeju.

According to data by Jeju Special Autonomous Province, around 2.33 million foreigners, mostly tourists, visited Jeju Island last year - that’s a major rise from 2008 when only 540,516 foreigners visited. Of those visitors in 2013, Chinese were the biggest group, accounting for more than 1.81 million people, followed by people from Japan, Malaysia and Singapore.

Lotte Hotels and Resorts is hoping to grab business travelers because the Lotte City Hotel Jeju is located 5 minutes from Jeju International Airport. According to Lotte, ground was broken for the hotel in June 2011, and the building has cost 160 billion won, or $150 million. The hotel has 262 rooms for guests, including eight suites, 159 deluxe rooms and 95 superior rooms with prices ranging from 300,000 won to 730,000 won per night. 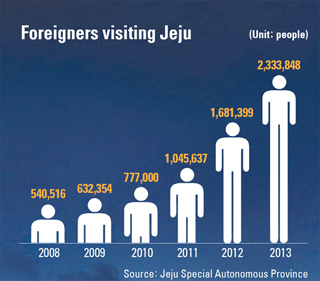 “There has been a constant demand for high-quality but affordable hotels for foreign guests visiting Korea,” said Song Yong-dok, chief executive of Lotte Hotel. “Domestic budget hotel chains will continue to grow and expand. Lotte Hotel is also receiving many requests from prominent investors, including the government and landowners, to operate business hotels using our know-how and leadership.”

According to Lotte, it plans to open three more business hotels in Korea this year, in Daejeon in March, Seoul in July and Ulsan in October. Globally, it plans on opening 5-star hotels in Guam in May and in Hanoi in August.

Almost a month after Lotte opens its business hotel in Jeju, E-Land Group will open its Kensington Marine Hotel, a 221-room, 5-star luxury accommodation facility, in late March. A specific date has not been decided as yet, said an official from E-Land.

“Seventy-percent of the hotel’s rooms will be ocean-views,” the conglomerate said in a statement yesterday. There will also be eight food and beverage outlets, including Korean, Japanese and Italian restaurants and a buffet restaurant that offers more than 80 foods.

“To open a hotel with a new concept, our experts in each area researched by visiting popular resorts overseas,” said an official from E-Land Group. “We hope to become among the ‘big three’ hotels in Jungmun [southern Jeju].”