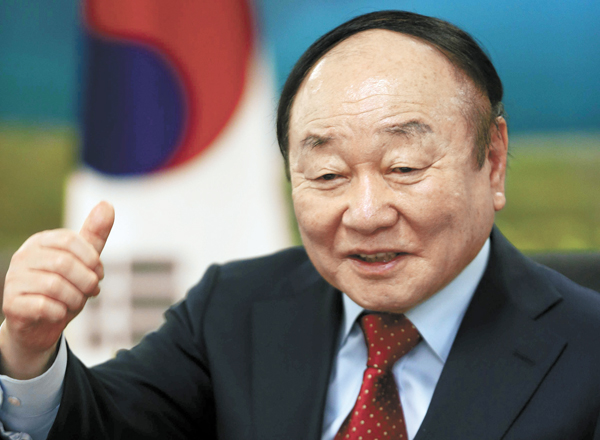 More than 25,000 North Koreans have defected to South Korea so far, according to government estimates, which accounts for nearly 0.1 percent of North Korea’s entire population of 24 million people.

In this respect, North Korean defectors will be the stepping-stone to unification, said Hyun Kyung-dae, executive vice chairman of the National Unification Advisory Council (NUAC), a presidential advisory body on unification.

Last week, North and South Korea agreed to hold reunions for war-torn families later this month, giving hundreds of elderly relatives a chance to meet for the first time in decades, although the North threatened to cancel the meeting a day after the agreement.

With these latest developments unfolding, the JoongAng Ilbo sat down with Hyun to discuss ways to support North Korean defectors and his views on the current inter-Korean relationship.

Q. What do you think is the importance of defectors?

What do you make of President Park Geun-hye’s comment that reunification would be a “jackpot”?

President Park mentioned the word “reunification” 22 times during her New Year’s press conference. The president is fully aware that achieving reunification is the most important milestone in securing peace and prosperity on the Korean Peninsula and in Northeast Asia. President Park attended the executive committee of our organization last November and asked the NUAC to play a leading role in helping North Korean defectors understand the government’s efforts. That is why the NUAC is planning to start a one-to-one mentoring program for North Korean defectors.

Could you elaborate on the specifics of this one-to-one mentoring program?

We are going to start a program we call Preparing Reunification One-Five. “One” means that with the support for defectors we can all become one, and “Five” stands for five separate programs - one-on-one mentoring, legal support, medical support, scholarship programs and job training. The idea is to accomplish “small reunifications” with defectors first.

What are your thoughts about the Kim Jong-un regime?

Kim Jong-un’s leadership has not yet been solidified. Last year, the North threatened with a nuclear weapon strike against the South and closed the Kaesong Industrial Complex last April. When the Southern government decided to pull out its businesspeople from the joint industry venture North Korea demanded that South Korea reopen the industrial complex. The leading figures of North Korea felt insulted. These kinds of strategic mistakes and provocations from the Northern side will lead North Korean officials to think that Kim Jong-un is an unreliable leader.

What is the most important factor in inter-Korean relations?

Could you guess when reunification will take place?

Well, if I knew the exact timing I guess I would have been an investor who could beat Warren Buffett. But one thing that I am sure of is that it will take place in the near future. Both economically and administratively, North Korea is on the verge of collapse and their people’s loyalty has faded away. The World Food Program announced that about 30 percent of North Koreans are suffering from malnutrition. Its corruption index is also the highest in the world.

Kim Jong-un executed his uncle and once-powerful member of the North’s inner circle, Jang Song-thaek, last year. And North Korea described Jang as “despicable human scum, worse than a dog.” Outsiders were appalled by the course of events related to the death of Jang. How did you feel about Jang’s fall?

In this respect, we also need to keep in mind that human rights violations in North Korea might be one of the most serious problem - even more pressing than North Korea’s nuclear weapons. If liberal-leaning figures in South Korea stay silent about this issue, their existence and ideology will be put into question.

(Vice chairman Hyun is from Jeju Island. He graduated from Ohyun High School and Seoul National University, then worked in the Seoul Supreme Prosecutor’s Office.

He was one of the early beneficiaries of the Jeongsu Scholarship, which was established by the former President Park Chung Hee in 1962. He met President Park Geun-hye in 1997 when she was the board president for Jeongsu and he was in charge of overseeing past scholarship recipients. Hyun was a five-time lawmaker and became close with President Park when he helped her win a Daegu by-election in 1998. Hyun was also one of Park’s seven core consultants before the presidential election in 2012.)