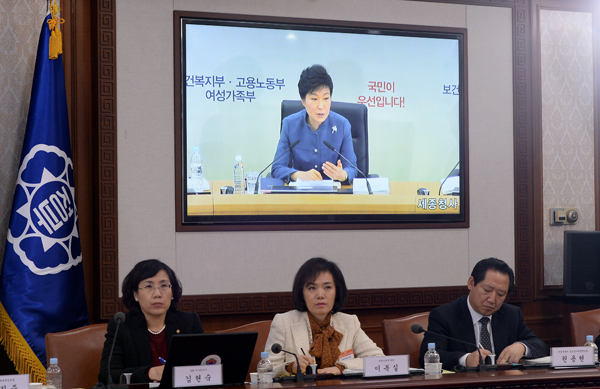 Officials at the Central Government Complex in Seoul listen to remarks made by President Park Geun-hye yesterday, who was in the Sejong City government complex, during the cabinet’s first video conference meeting. [NEWSIS]

During the video conference, which connected the two government complexes in Seoul and Sejong City, south of the capital, Park visited the Sejong City complex, leading the country’s first virtual cabinet meeting.

“I think the video conference we are holding right now proves that physical distance between government departments is not a problem for us at all in terms of discussion and cooperating with one another,” Park said from Sejong City, appearing on the screen installed in the Central Government Complex in Seoul.

In her opening remarks, Park urged the ministers to cooperate with one another to maximize the employment and welfare sectors for the public.

“The new government aims to create a virtuous cycle among welfare, job creation and economic growth,” she said. “For this, what is important is to combine and connect all the welfare services that the people need and create a synergy effect.”

Park called for “a tailored system for employment and welfare based on life cycle,” the first task for the integrated welfare system.

The new system would essentially expand services for the underprivileged by providing them services based on their household income and working conditions. Regarding welfare for seniors and the disabled, the president called upon the National Assembly to pass a pending bill within the month that would launch a pension program for the disabled.

Park, Korea’s first female president, also said that companies must take measures to protect the rights of working women so they would not fear that taking maternity leave would put their careers in jeopardy.

According to government statistics, the number of female employees who were dismissed during their maternity leaves reached approximately 4,100 between 2010 and 2012.

“Even now, there are many cases in which women are wrongfully fired simply because they took maternity leave,” she said. “And that results in a disruption of their career paths. We need thorough supervision on the companies.”