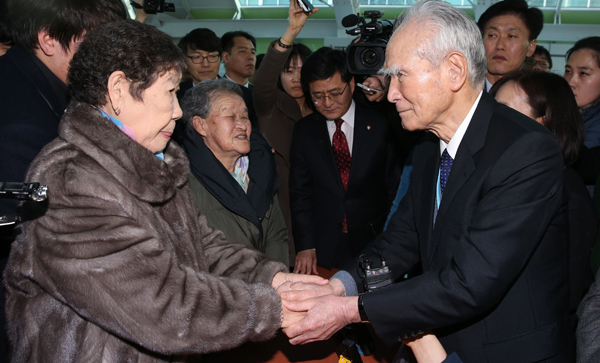 On a state visit to Seoul, former Japanese Prime Minister Tomiichi Murayama met yesterday with some of Korea’s surviving “comfort women,” who were forced into prostitution by the Japanese army during World War II.

This marks the first time a former or current Japanese prime minister has publicly met with former comfort women.

Kicking off his three-day trip, Murayama also held a meeting with lawmakers from the minor opposition Justice Party and attended an art exhibition at the National Assembly showcasing items by former comfort, titled “Drawing Peace in the Name of Comfort Women.”

At the show, the former prime minister was presented with a piece called “Flower Not Bloomed” by Kim Sun-deok, one of the victims. When Park Ok-seon, another comfort woman, learned that she was the same age as Murayama, she exclaimed, “I thought he was a lot younger! Please stay healthy.”

In response, Murayama nodded in understanding.

“I am not sure why Korean and Japanese relations have become this way,” he told Justice Party lawmakers earlier that day.

“The two countries have a historically long relationship and share a lot of commonalities. I hope there can be heart-to-heart dialogue and a sharing of sincere trust.”

The 89-year-old retired politician, who formerly headed the Social Democratic Party, is widely known here for statements he made on August 15, 1995 - the 50th anniversary of the end of World War II - in which he apologized on behalf of Japan to its victims and for his country’s past wartime aggressions.

His words followed a 1993 statement issued by Yohei Kono, Japan’s chief cabinet secretary at the time, in which Japan issued an apology for its systematic sexual enslavement of women forcibly recruited from Korea and other neighboring countries during World War II.

However, in recent months, Prime Minister Shinzo Abe has stirred controversy, making remarks that appear to contradict the sentiments in both of those statements.

“This visit - which comes during a situation when Korea-Japanese relations have deteriorated unprecedentedly - shows former Prime Minister Murayama’s determination toward the future of Korea-Japan relations and peace in Northeast Asia,” Shim Sang-jeong, the Justice Party floor leader, said yesterday.

“There is a lot of concern as the Abe administration shows movement that seems to deny its imperialist past and its colonization of other countries,” Shim continued. “I hope this visit can be an opportunity to reaffirm the historical implications of the Murayama Statement and resolve frozen Korean-Japanese relations.”

Murayama initially requested to meet with President Park Geun-hye, however, according to Jung Jin-hoo, the Justice Party deputy floor leader, a meeting could not be arranged because of scheduling conflicts. The Blue House proposed a meeting with the prime minister instead.

Murayama yesterday expressed “disappointment” that a meeting with Park could not be materialized, but said he looked positively toward a meeting with Prime Minister Chung Hong-won.

Murayama is scheduled to deliver a speech today at the National Assembly on Korea-Japan relations and the importance of recognizing history. Saenuri Party Chairman Hwang Woo-yea and Democratic Party Chairman Kim Han-gill, as well as independent lawmaker Ahn Cheol-soo, will attend.