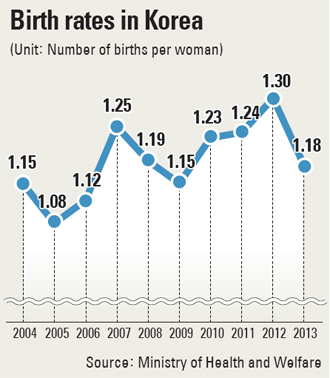 Last year’s fertility rate was estimated to be 1.18 births per woman, the Ministry of Health and Welfare unveiled yesterday during its annual report to President Park Geun-hye.

The figure, a decrease from 1.3 in 2012, dampened the government’s hopes that its drive to encourage childbirth is having any effect. Over the past few years, the birth rate was in an upward trajectory, following 1.24 in 2011 and 1.23 in 2010.

The latest estimate, the lowest since 2009, is based on birth rate records from January to November 2013, with a projected rate for December.

Since 2005, when the government saw a record-low birth rate of 1.08, it has poured an average of 10 trillion won ($9.34 billion) annually into incentives and welfare policies aimed at raising the birth rate.

The efforts appeared to pay off when birth rates over the past three years stayed above 1.2, a psychologically important mark for many officials.

The Ministry of Health and Welfare explained that the drop was triggered by people’s tendency to delay marriage and childbirth. Other experts also echoed that assessment.

“These days, people tend to delay childbirth and wait until they think they can earn enough money to support their children,” said Kim Seung-kwon, a researcher at the Korea Institute for Health and Social Affairs.

“Many married couples see their job status [as a full-time worker] and the possession of a home as requirements that must be met before having babies,” the researcher said. “But now, fulfilling both requirements is really tough, especially for young couples.

“College graduates have a hard time getting decent, full-time jobs after graduation. So the financial insecurity hampers them from marrying and having children.”

The budget for measures aimed at promoting childbirth increased by 252 billion won for 2014, from the original government proposal of 3.3 trillion won, as part of the government’s efforts to boost Korea’s low birth rate.

But experts have noted that how the budget is utilized is far more important than the amount.

“The government should spend more money making sure there are enough rental homes for young couples,” said Cho Young-tae, a professor at Seoul National University’s Graduate School of Public Health.