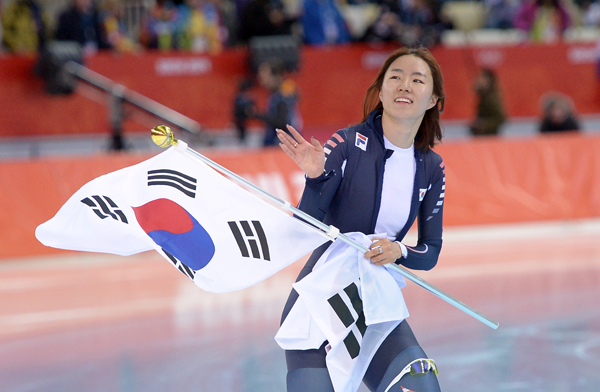 When Lee Sang-hwa claimed the gold medal in the women’s speed skating 500 meters, setting a new Olympic record in the process with a combined time of 74.70 seconds in her two races, the cheering was nearly universal - from her Canadian coach Kevin Crockett to fans at the Adler Arena to her family watching on television with neighbors in Dongdaemun, northeastern Seoul. But there was one notable exception - Lee herself.

Holding a Korean national flag in her hand, she skated around the rink with few tears in her eyes.

“All of a sudden, all the days of my last four years that I spent preparing for this Olympics flashed through my mind,” Lee told the Korean media in a post-race interview. “I know that people call me an ‘ice woman,’ because they think I don’t get nervous for big races like this. But I think that is just because it is the Olympics. It makes athletes recall their memories and that is what happened to me at that moment. The hours I spent riding a bike in the mountains and the times that I had to endure hardcore training all just popped into my head.”

The pressure on Lee must have been indescribable. Korea did not win any medals in the first three days of the events, including in the men’s 1,500-meter short track and the men’s 500-meter speed skating, events in which it was expected to be competitive. So Lee, the 2010 Vancouver Winter Olympics champion, had to stand on the starting line of the lonely rink by herself, waiting for the starter’s pistol, with a whole nation’s hopes for Sochi gold weighing on her shoulders.

But Lee fulfilled all those hopes perfectly.

By finishing the initial race in first place with a time of 37.42 seconds, Lee put herself in a good position to win the event. Her time was 0.15 seconds ahead of her closest competitor, a huge lead in an event like the 500 meters, where a winner can be determined by 0.001 seconds, giving Lee a measure of comfort for the second race.

But she did not use that lead as an excuse to ease up, skating her second race even faster and finishing with a time of 37.28 seconds. Her combined time of 74.70 seconds set a new Olympic record, beating one that had stood since the 2002 Salt Lake City games.

“I really didn’t like that people called me a Cinderella in Vancouver,” Lee said. “So I tried hard to improve my skills, particularly in making a quick start in the first 100-meter section, which was considered one of my biggest weaknesses.” 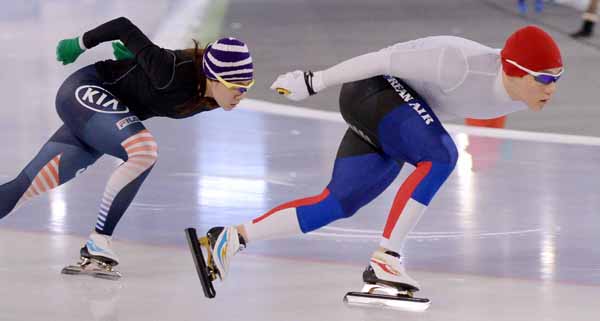 Lee Sang-hwa, left, races with Mo Tae-bum during training at the Taereung International Rink in Nowon District, Seoul, in January.[NEWSIS]

Lee bulked up significantly after Vancouver. Today, her thighs measure are 56 centimeters (22 inches) each in circumference. Lee spent many hours cycling to develop a stronger lower body and improve her speed. She cycled an eight-kilometer mountainous course, full of punishing inclines, every day over the last four years. She also used to hang a 10 kilogram (22 pound) tire from her bike and ride a more than 20-kilometer (12.4-mile) flat course every day.

“Winter sports athletes must really train hard in summer if they truly want to make a big smile in winter,” Lee said in an interview she had with the JoongAng Ilbo before the Olympics. “I felt like I wanted to take a break every second, but I tried to fight against any thoughts that would prevent me from becoming a better athlete.”

Lee did everything she could to strengthen her lower body, even though she was already a gold medal winner in Vancouver, and even though she set a world record in the 500 meter at the 2012-13 Speed Skating World Cup last year - a record she has since broken three more times.

She gladly put up with the hellish summer training and, at their peak, her thighs once reached 60 centimeters around - although, as she reduced her body fat ahead of the Olympics they went down to their current 56 centimeters.

Her thighs even impress cyclists.

“Skaters and cyclists basically use the same muscles,” said Cho Ho-sung, a cyclist who finished in fourth place in the 40-kilometer point race in the 2000 Sydney Olympics. “When I see her lower body, I believe that she didn’t just develop it in a short period of time. She must have been repeating intensive training again and again for a long time. When I see her starting techniques, I see a very strong confidence.”

“Her techniques, especially how she kicks the ice, are like what sprinters do on track,” he said. “ I can see that she isn’t wasting any of her stamina because she races with the correct posture. I also see great confidence from her. Some players look at their opponent when they stand on the starting line, but she just looks ahead, concentrating.”

Most female athletes train by squatting 140 kilograms at a time, but Lee lifts more than 170 kilograms, an amount difficult for many male athletes.

She also had been consistently participating in 1,000-meter races - even though she never finished in the top three in any international competition - just to improve her muscle endurance.

In addition to training her body, Lee also worked on training her mind. “Since the Vancouver event, I had some bad times because I had injuries and struggled in competitions,” Lee said.

“But I never considered it a slump. I try to calm myself by reading some good books, including the one that written by monk Hyemin. Keeping your concentration at all times is a very hard thing to do, so I try to maximize my concentration levels, especially five minutes before each race.”

Such efforts certainly paid off. Her opening 100-meter sections in both races were the fastest at the Olympics, with 10.33 seconds in the first race and 10.17 seconds in the second.

“I didn’t know that I was going to win the gold,” the champion said. “I’m proud of what I have done.”

“I actually tried to persuade her to stop skating,” said Kim In-soon, Lee’s mother, in an interview with the Korean media yesterday. “She had varicose veins on her calves, which spread to her thighs. I saw my daughter suffering from the pain, but she just repeatedly reassured me that she was fine. I’m just glad that she finished the races without any problems.”

Fans and analysts have already started saying that Lee should participate in the 2018 Winter Olympics, which will be held in Pyeongchang, Korea, but Lee said she would have to think about it later, after the Sochi Olympics are finished.

“I still have one more event to compete in,” she said, referring to the 1,000-meter speed skate.

“I think she will participate in the Pyeongchang event because it is being held in our home country,” said Jeon Pung-seong, who was Lee’s elementary school coach. “I previously told her to continue her career as long as she can, just like the veteran skater Lee Kyou-hyuk, who competed in the men’s 500-meter speed skate in Sochi at 36, so young athletes could learn something from her.”

The Sochi Olympics champion will be rewarded for her excellence. According to the Korea Sports Promotion Foundation, a gold medalist at Sochi is projected to receive a 60 million won ($56,220) bonus and a 1 million won per month pension for life.