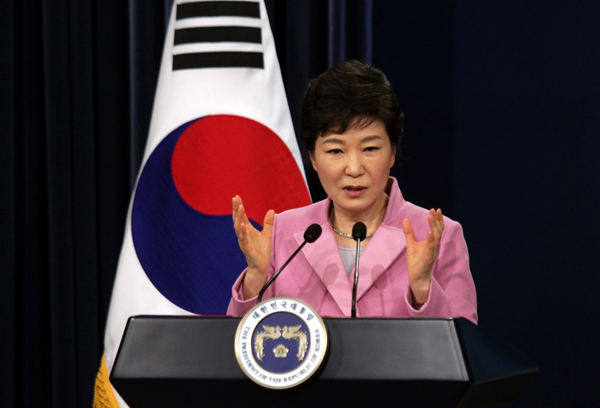 At a New Year’s speech on Jan. 6, President Park Geun-hye called the reunification of the two Koreas a “jackpot” opportunity for not only the Korean Peninsula but also its neighbors. [Joint Press Corps]

This year marks the 25th anniversary of the fall of the Berlin Wall. Today, Germany has become a model state that contributes to world peace as a member of the Group of Eight. Next year will mark the 70th anniversary of the division of the Korean Peninsula. Koreans have lived under a truce, not in a state of peace, for much longer than anyone could have predicted. Even temporary meetings of families separated six decades ago - inarguably the most basic humanitarian issue between South and North Korea - are sporadic and used as political bargaining chips.

People tend to think of the fall of the Berlin Wall and German reunification as a sudden chain of events. But German reunification was the outcome of thorough preparations. Korea’s situation is more complicated than Germany’s at the time. Lately, uncertainty on the Korean Peninsula and in Northeast Asia has grown. Internally, some Koreans have even grown indifferent about reunification.

In a New Year’s address in January, President Park Geun-hye mentioned that unification could be a “jackpot” of an opportunity, and at the Davos forum in January, she reiterated that unification could be a jackpot not only for Koreans but also for their neighbors. In fact, the Park administration proposed happiness for all Koreans on the peninsula as the main vision of its North Korean and foreign affairs policies as an extension of its “happiness for the citizens” agenda.

Thanks to the endeavors of the past year, neighboring countries have changed their perspectives on the future of the peninsula, and a new atmosphere has been created to discuss unification.

At the Seoul-Beijing summit last year, Chinese President Xi Jinping said he supported the peaceful reunification that Korean people long for. Russian President Vladimir Putin also expressed his expectations for a unified Korea in the region.

These changes are the products of Park’s successful summits with neighbors and ambitious promotion of policies like the Korean Peninsula trust process, the Northeast Asia peace and cooperation vision and the Eurasia initiative.

Preparation for reunification should be approached from domestic, inter-Korean and international aspects. The diplomatic efforts that West Germany made show how important the external environment is. When the president questioned the Ministry of Foreign Affairs about the direction of this year’s operations, it presented specific tasks for peaceful reunification and trust-based diplomacy.

In the process of reunification, establishing peace on the peninsula will be the most urgent task. First of all, Seoul will unfold preventive diplomacy to deter North Korean provocations and focus on resolving the nuclear issue, which is the biggest obstacle to reunification. Based on reinforced international intolerance for the North’s nuclear programs, we will induce Pyongyang to abandon them.

Lastly, we need to expand international support for reunification. In addition to our neighbors, the government hopes to reinforce cooperation with friendly nations, including the MIKTA members - Mexico, Indonesia, Korea, Turkey and Australia - and international organizations.

Through economic diplomacy, the foundation for reunification will be strengthened, and the Korean Peninsula Club will be formed among the embassies that cover both South and North Korea from stations in Seoul, and pursue multilateral discussions on the North Korean situation.

When U.S. President Barack Obama visited Korea in 2012, he said that the power of history and hopes of the people cannot be denied. Those who dream and prepare will have a future.

In order to not get swept up by the storm, we need to take an initiative to prepare for the future with a clear vision, understanding and conviction of the benefits and costs of reunification. Overcoming the challenges of the time and opening a new chapter in the histories of the Korean Peninsula and Northeast Asia is the calling for Korea’s foreign policy.

*The author is the minister of foreign affairs.