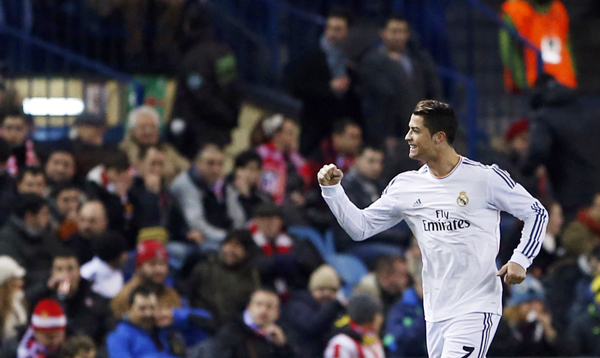 Real’s Cristiano Ronaldo, left, celebrates his goal during the second game of the Copa del Rey semifinal match against Atletico de Madrid at the Vicente Calderon Stadium in Madrid on Tuesday. [AP/NEWSIS]

Cristiano Ronaldo helped Real Madrid reach its third Copa del Rey final in four seasons with a 2-0 win over Atletico Madrid on Tuesday and a 5-0 victory on aggregate.

Ronaldo, who was hit on the head by a cigarette lighter at halftime, converted a pair of early penalties at the Vicente Calderon to put the match beyond Atletico’s reach.

Atletico beat Madrid at its Santiago Bernabeu Stadium to lift the trophy last season but exits the domestic cup competition with doubts about its surprise Spanish league aspirations.

Madrid will face either Barcelona or Real Sociedad in the April 19 final, with Barcelona leading 2-0 going into the second leg at San Sebastian.

“It’s the least important competition of our season but a final is always something nice for the team,” Madrid coach Carlo Ancelotti said.

Despite Atletico coach Diego Simeone’s promises of a rally, the hosts were effectively out of the competition just seven minutes into the game when the inexperienced Javier Manquillo shoved Ronaldo from behind inside the area to set up the opening spot kick.

Ronaldo blasted his shot into the left side of net, past the diving Daniel Aranzubia, to end a three-game goal drought.

Raul Garcia, who was moved up from midfield to striker because of the absences, saw his shot come off the post just moments before Madrid doubled its advantage.

“The first leg was very important, of course, and the two penalties also,” Madrid goalkeeper Iker Casillas said. “They took some of their bite away.”

Atletico defender Emiliano Insua slid into Gareth Bale to set up the second penalty after 16 minutes, with Ronaldo beating Aranzubia to the same side but along the ground for his 34th goal of the season.

There was little drama beyond that apart from the yellow lighter that struck Ronaldo as he left for the dugout at halftime, which could lead to a fine or sanction for Atletico.

Manquillo was taken to hospital after he came down awkwardly on his neck just before halftime.

Casillas extended his run to 863 minutes without conceding, a run stretching back to November in the Champions League and Copa del Rey. Madrid beat Barcelona 1-0 in extra-time to win the Copa del Rey in 2011.