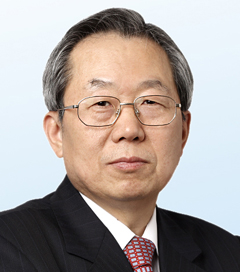 The new skipper of the STX Corporation, the holding company of cash-strapped STX Group, vowed to normalize the company after Kang Duck-soo, the founder and chairman of STX Group, was officially squeezed out of management.

The corporation said yesterday that Seo Choong-il, former vice president of the group’s shipping affiliate STX Pan Ocean (now called Pan Ocean), was appointed president and CEO of the company at a temporary shareholders and board meeting on Tuesday.

“For quick normalization of the company, I will actively cooperate with creditors,” Seo said at his inauguration ceremony yesterday at STX Namsan Tower in central Seoul yesterday.

“On the basis of making an innovative management system, communications and use of human resources, let’s make a company where employees and customers can be happy.”

Seo has worked for Pan Ocean Shipping since 1981. After STX Group acquired the shipper in 2004, he held various positions within the group, from sales to foreign affairs. The 59-year-old from Busan stepped back into an advisory position last October, but successfully returned as the CEO to lead the company, which is under a voluntarily debt workout program.

Industry insiders said that since Seo has been working with STX for a long time, he is the right person to boost confidence of the employees and put the company back on track.

The STX Corporation set a goal of achieving sales of 2.2 trillion won ($2.07 billion) and operating profit of 40 billion won by 2017. The company aims to become a specialized trading company focused on energy (coal and oil), materials (steel), machine engines and maritime logistics.

Last month, the Korea Development Bank, the main creditor of the corporation, and other creditors approved a plan that includes a 699.8 billion won debt-to-equity swap, extending the corporate bond’s maturity to the end of 2017 and adjusting interest rates to help the company get back on track.The price of the support was for the group to adopt a professional CEO system, which forced the exit of STX Group founder Kang.

As Seo became the new CEO, Kang is officially out of management of all STX affiliates. The 64-year-old already gave up his CEO position of STX Pan Ocean last July and then forfeited STX Offshore and Shipbuilding in September and STX Heavy Industries in November.

The only position that Kang now holds within the group is chairman of the board at STX Engine and Chairman of the STX Scholarship Foundation - none of which directly relate to critical business decisions.

According to STX employees, Kang already cleared his office at STX Namsan Tower over the weekend and told his closest executives that he was sorry for making bad decisions. He is expected to work out of an office at the STX building in Gangnam District, southern Seoul, where the STX Scholarship Foundation is located.