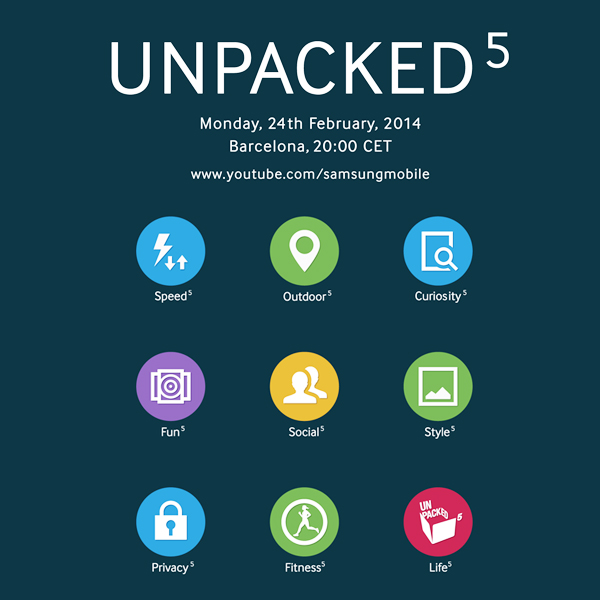 An emailed invitation for the predicted Samsung Galaxy S5 launch that is slated for later this month. Provided by the company

Samsung Electronics is hyping its new Galaxy S5 with an image teasing an event slated for later this month.

The image, unveiled through its Facebook and blogs, is composed of nine words - speed, outdoor, curiosity, fun, social, style, privacy, fitness and life - that capture the qualities of new products to be unveiled during the Mobile World Congress in Barcelona, the company said.

Samsung’s newest flagship phone has been rumored to be among the products being introduced at the show ever since the company sent out a media invitation to the event, named “Unpacked 5,” on Feb. 4. The company confirmed that fact yesterday. “The nine keywords provide a glimpse of what the S5 will be like,” said an official of Samsung Electronics.

Excitement is building about Samsung’s latest premium smartphone, which the Korean tech giant is relying on for a turnaround from its disappointing fourth-quarter performance and to dispel pessimism about its ability to innovate.

Rumors were particularly rife about a fingerprint- or iris-scanning function, which may explain the word “privacy” in the teaser image, according to market observers.

More analysts are expecting the S5 to feature fingerprint scanning, not iris scanning, a claim supported by news reports early this week.

The blog Android Authority yesterday quoted an industry source saying the fingerprint scanner will be located at the bottom left or right side of the device’s screen.

The word “speed” may relate to the S5 using Qualcomm’s Snapdragon 800 processor or Samsung’s own Exynos 5 processor.

The terms “outdoor” and “fitness” appear to refer to functions that make outdoor activities more convenient such as enhanced waterproofing, which was also featured on the Galaxy S4. Some rumors say they reference a stronger battery. The S4 uses a 2,600 milliampere-hour (mAh) battery. The S5 is rumored to have a 3,000 mAh unit.

The term “fun” may be associated with the camera, which is rumored to be 16 million to 20 million pixels, a significant improvement on the 13 million pixel camera of the S4.

The S5 is also rumored to have a 5.25-inch Amoled display, with 2,560 X 1,440 pixels QHD resolution, and run on the latest Google Android KitKat operating system.

Samsung, which unveiled few new mobile models during the international Consumer Electronics Show in Las Vegas last month, may also unveil a follow-up model to the Galaxy Gear during the MWC. Samsung released the smart watch, the world’s first, in September. The Galaxy Gear 2 is rumored to sport a flexible OLED screen rather than the Super Amoled screen on the original model.