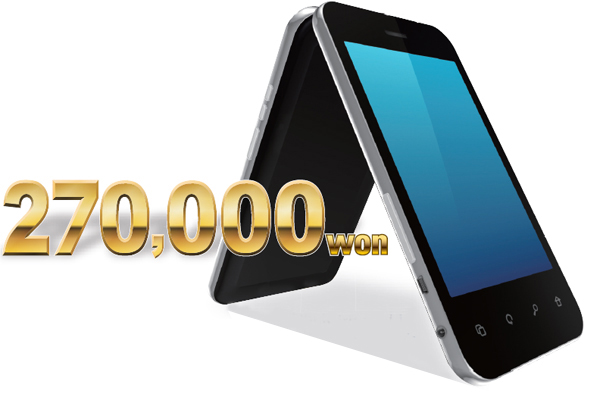 Does anyone complain about getting a product for a cheaper price? Of course not.

In the United States they revel in the idea and go to obscene lengths for a discount on a high-definition TV or a luxury handbag during Black Friday sales.

So, if you were offered the latest smartphone for a price far below its normal retail cost, or in some cases for free with an extra cash payment, would you pass up the opportunity?

The huge line of people in front of a smartphone retailer near Dongdaemun Station in downtown Seoul on Tuesday didn’t.

It was reported that some people spent the night in front of the store, while others traveled long distances to get there.

The people in line at Dongdaemun weren’t waiting to get their hands on the newest iPhone or Galaxy smartphone. They were there because the iPhone 5S was being offered for 100,000 won ($94), while the Galaxy Note 3 was priced at 180,000 won. The Galaxy S4 LTE-A was given out for free.

Small smartphone stores, with the backing of telecommunication companies and manufacturers, have been offering low-priced smartphones through guerrilla sales tactics - notices that pop up on websites and just as suddenly disappear or through text messages sent directly to potential customers. It’s their way of clearing inventories of old phones while also getting around a government crackdown on subsidies that exceed a 270,000 won per phone limit.

In some stores, the subsidy offered on the Galaxy S4 LTE-A was 1.2 million won, way above the retail price of 954,000 won. Anyone who bought the smartphone would be going home with it and roughly 250,000 won of cash in their pocket. After signing a two-year contract with a telecom, of course.

What’s the harm in such ferocious marketing tactics?

The biggest complaint is unfairness. It comes from people who never hear about such offers because their phone numbers are not in company databases already or they don’t troll the websites used to publicize the deals.

Many of those people are elderly, who could probably use the deals a lot more than the young people who actually nab them.

Do the elderly need smartphones? You bet they do. A woman I know in Cheongju in her 60s has been trying to switch her 2G phone for a new smartphone. For years, she didn’t feel it was necessary to buy a smartphone, which usually comes with a substantial monthly bill. But with her children and grandchildren uploading pictures and communicating through apps such as KakaoTalk, she wanted to join in on the action.

But finding a new smartphone at a price she considers reasonable hasn’t been easy. The price tag on an iPhone 5 or 5S or a Galaxy 4 or 5 is more than she is prepared to pay because the only money she and her husband make is from renting an apartment out.

She says a monthly phone bill exceeding 100,000 won a month is too much of a burden.

One day the woman came across an advertisement from a store offering smartphones for free. She asked her children to look into it. It turns out the phones were first-generation Galaxy phones. Not only were they utterly outdated but the store was demanding customers sign a three-year contract.

Many elderly people feel hopeless about the whole smartphone racket. And yet they will have no other choice but to give up their 2G phones since the carriers are shutting down or cutting back 2G phone services in favor of the more profitable later generation services.

Last year, KT stopped providing a 2G service, while SK Telecom and LG U+, which have combined subscribers of roughly 2.3 million, are likely to pull the plug in 2018.

According to Korea University Professor of Business Management Lee Dong-won, the marketing costs in the telecommunication market, which were around 2.8 trillion won in 2005, have surged to 6.8 trillion won as of 2012.

Much of the marketing is geared toward getting customers to switch phones and carriers, a cost estimated to exceed 17 trillion won last year. Lee claims such spending is a waste of national resources. And after giving out all that marketing money, companies, including manufacturers, simply raise the prices of their phones or services, which are paid for by the sucker who blithely gets a phone without frantically searching for mercurial deals and subsidies.

Normal consumers, in other words.

The government said it would come down hard on any retailers or telecommunication companies that are involved in the steep subsidies being offered via these guerrilla tactics.

But will it? The three mobile carriers were slapped with a fine of 100 billion won in December for violating subsidy limits. Since December 2012, the total amount of fines levied on the mobile carriers has approached 200 billion won. The companies’ operations were even suspended for over 20 days because of their over-aggressive marketing strategies.

But the game continues. The companies are willing to pay the hefty fines as long as they can continue to persuade customers to switch carriers through irresistible subsidies on dazzling new phones.

The government should try to improve the transparency of the distribution process. A bill improving the distribution structure of mobile devices is under discussion. The bill allows subsidies to be decided upon by the private sector instead of being limited, as they are now. But the companies - whether it’s Samsung, Apple or the mobile carriers - will have to make the subsidy offer totally transparent.

This will free up sales information to everyone. The woman in Cheongju can actually buy a smartphone without feeling cheated. And I won’t have to sit in front of my computer for countless hours waiting for some message to pop up telling me a new iPhone is being given away almost for free instead of living my life.