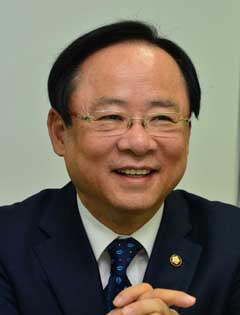 A former judge and fourth-term lawmaker, Lee, 63, is a senior member of the pro-Park faction inside the party.

He was planning to run for the floor leader seat in the party but accepted the offer from Prime Minister Chung Hong-won yesterday morning to assume the minister post.

His long-time parliamentary experience and his relatively certified morality will likely facilitate his passage during the highly scrutinized confirmation hearing - a process that has failed a number of ministerial candidates.

“The Blue House has made efforts to minimize side effects from the ministerial vacancy,” said Min Kyung-wook, a spokesman for the Blue House. “Lee has a wide understanding of overall state affairs and has the capability as well as high moral repute.”