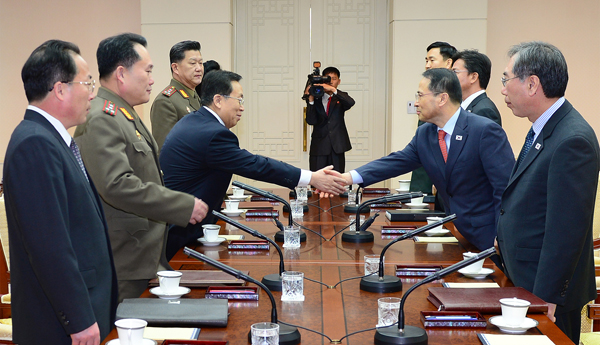 Negotiators from both Koreas started the morning session at 10 a.m. yesterday at the border village. All five negotiators from each side attended. After the 80-minute session, a second session resumed at around 2 p.m. and ended at 4 p.m.

After a three-hour break, they resumed talks at 7:15 p.m., which were adjourned after 30 minutes.

As of press time, the South Korean government had not briefed reporters on the outcome of the talks.

“Each side has different interests to discuss,” a South Korean government official told reporters yesterday before the talks ended.

“They just shared what each side wanted to talk about and asked questions of each other,” he continued, “but it is unlikely they will reach a significant deal.”

According to the list of negotiators from the two sides, which was exchanged on Tuesday, South Korea sent Kim Kyou-hyun as its chief negotiator. Kim is the first deputy director of the presidential Office of National Security and is also the secretary general of the National Security Council (NSC). Four officials accompanied Kim from the Blue House, the Ministry of Unification, the Prime Minister’s Office and the Ministry of National Defense.

On the North Korean side, the main negotiator was Won Tong-yon, deputy director of the United Front Department, which is in charge of inter-Korean cooperation. He was joined by a senior official of the National Defense Commission, a colonel of the North Korean Army and two senior officials from the Committee for the Peaceful Reunification of Korea.

Both Kim and Won are inner-circle officials who can communicate directly with their leaders, South Korean President Park Geun-hye and the North’s Kim Jong-un.

Before the talks, they did not decide on any agenda, so they just prepared what issues they wanted to discuss, according to the Ministry of Unification.

“As you know, the agenda has not been decided,” Kim told reporters before departing for the border village. “Although we will deal with [various] inter-Korean matters, we will focus on carrying out the family reunion events as scheduled. I will attend the meeting with an open-minded attitude and spirit to seek opportunities to open up a new Korean Peninsula.”

The two Koreas have agreed to hold reunions of families separated during the 1950-53 Korean War next week, between Feb. 20 and 25.

North Korea was expected to call for improvements in several inter-Korean issues like the reopening of the Mount Kumgang resort, a business seen as a vital source of hard currency for the regime; scrapping upcoming South Korea-U.S. joint military drills, which Pyongyang claims are war rehearsals; and easing the so-called May 24 sanctions that halted all government-level assistance and aid for the impoverished state after the 2010 sinking of the warship Cheonan.

The major concern of South Korea included holding the family reunions as scheduled regardless of the joint military drills with Washington and making them regular events; discussing a series of proposals by the Park Geun-hye administration such as developing the Kaesong Industrial Complex into an international business district; setting up a so-called peace park in the demilitarized zone; and building a railway network from South Korea to Europe through North Korea and Russia.

As it’s been about six years since the two Koreas held a meeting of officials higher than vice-ministerial-level, which last took place in December 2007, attention was focused on the North’s chief negotiator.

A graduate of Kim Il Sung University, Won has extensive experience with inter-Korean functions. He attended seven senior inter-Korean meetings in the 1990s, the 2007 inter-Korean summit between the prime ministers, and was on the 2009 North Korean delegation that visited Seoul for the memorial service for the late president Kim Dae-jung.

Won has appeared at a critical time during a thaw in inter-Korean relations. He allegedly arranged the secret contact between the United Front Department’s head, Kim Yang-gon, and Yim Tae-hee, then-South Korea’s Labor Minister, in October 2009 in order to hold a summit that never came off.