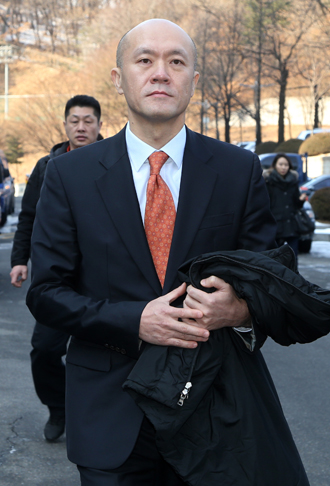 Chun Jae-young walks out of the Seoul Central District Court in southern Seoul after the ruling yesterday. [NEWSIS]

The son and the brother-in-law of former strongman Chun Doo Hwan both avoided jail time for evading their taxes, but they will still have to pay hefty fines.

The Seoul Central District Court yesterday handed down a three-year prison term to Chun Jae-yong, the second son of the former president, and ordered him to pay a 4 billion won ($3.7 million) fine for evading taxes on a land deal.

Lee Chang-seok, the younger brother of Lee Soon-ja, the former first lady, received prison term of two and a half years. He was also ordered to pay a 4 billion won fine. Chun and Lee’s prison terms are both suspended for four years.

Chun and Lee Chang-seok were convicted of colluding to dodge 2.7 billion won in transfer taxes in the sale of a plot of land in Osan, Gyeonggi, in 2006 by putting a false price in the contract.

“After reviewing all the documents submitted, it is clear that the contract was fraudulent and the defendants are guilty,” said the court. “It is highly probable that the two knew their actions would result in tax evasion and carried out their plans accordingly.”

The court added that the 2.7 billion won tax dodged by the two was not a small amount and both of the defendants had been convicted of tax evasion in the past.

The court said it took into account the fact that Chun and Lee eventually paid around half of the taxes owed. The court also accepted their lawyer’s claim that the nephew and uncle followed the instructions of a tax accountant and didn’t have in-depth knowledge of the taxation issues at the time of the deal.

Prosecutors proved that the duo evaded the tax by signing a contract with a fraudulently low land price. The prosecution sought a six year-prison term for Chun and a five-year term for Lee.

On his way out of the court, Lee told a throng of reporters, “I am sorry that I have caused concern to the people. I will do my best to pay all of the fines being ordered.”

Chun did not rule out the possibility of appealing the verdict. “I will consult with my lawyer first and decide on an appeal,” he told reporters.

Chun also did not say how he will pay the 4 billion won fine. During the course of the trial, the 50-year-old, who is the husband of former actress Lee Sang-ah, pleaded for leniency, saying he was not financially capable of paying a large fine because his assets had been seized by prosecutors to pay off his father’s massive fine for misdeeds in office.

Chun’s trial was being watched to see if the court would be tough on the former president’s family, especially after the Chun family agreed last September to pay off the 167.2 billion won it owed for offenses committed by the dictator when he ruled the country from 1980 through 1988. They surrendered many assets to pay the fine, which was originally 220.5 billion won, including the family’s ancestral mountain. Chun’s family avoided paying the fine for 16 years.