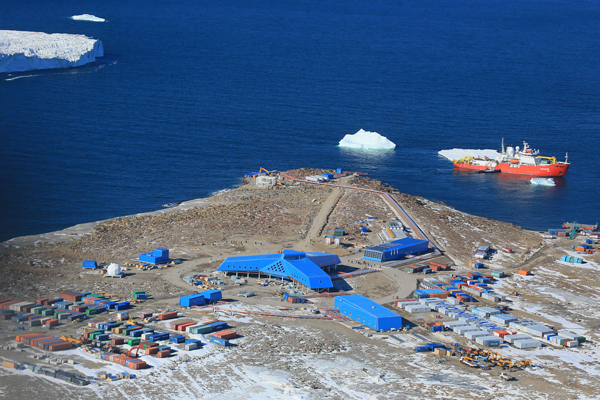 Korea’s state-run research institute is pushing to build a hard-surface crushed rock runway in Antarctica, part of a bid to facilitate transportation and possible rescue efforts there.

The 1.8-kilometer (1.1-mile) runway will be located near Jang Bogo Station, Korea’s second research station that officially opened yesterday, in Terra Nova Bay, located in Victoria Land, Antarctica. The building houses 16 laboratories and 24 observation facilities, and is capable of accommodating up to 60 people.

The move follows the Korea Polar Research Institute’s completion of a feasibility study of a bedrock site near the research station, in which researchers determined that the site was suitable for the establishment of a landing area.

The institute, under the Ministry of Oceans and Fisheries, said it will commence runway construction within the year, and completion is slated for 2017, with approximately 50 billion won ($47 million) allotted for it.

The project began when the Korea Polar Research Institute discovered through satellite images a large area of bedrock on a nearby plateau.

The new landing area will save Korea more than 1 billion won annually, which the country already spends to use runways managed by other countries.

The gravel runway, the study concluded, will not be affected by adverse weather conditions or climate change. By comparison, glacial runways, made of compact snow, are more vulnerable to external conditions, especially when the ice melts away. The Rothera Research Station, operated by the United Kingdom, also has a crushed rock runway.

According to the institute, the new runway will generate profit, and Korea will be free to charge other nations for the use of the venue.

“The new structure will greatly support the research activities at Jang Bogo Station because it can facilitate the transportation of research equipment,” a researcher from the Korea Polar Research Institute said. “And it will also save on airport fees and create revenue through fees imposed on other countries for its use.”

Korea needs to act swiftly to ensure the runway’s construction because “Italy is also interested in building a runway in the area,” said Lee Dong-hwa, president of Namkyong Engineering and Construction.

The construction company participated in gathering research about the site. “The government should promptly draw up a more specific construction plan and budget projections for its construction,” Lee added.

Under the Antarctic Treaty System, Antarctica is considered a scientific preserve and military activity is banned. The agreement, established in 1961, currently has 50 member nations.

Antarctica, the last great wilderness devoid of a native human population, is 14 million square kilometers of ice and snow, and about one and a half times the size of Canada.

Scientists worldwide visit this remote corner of the Earth to collect data related to the ozone and global warming. In 2006, the Korean government announced a plan to build the Jang Bogo Station in the Antarctic in order to enhance the country’s scientific capabilities and promote collaboration for the development of Antarctic sciences.