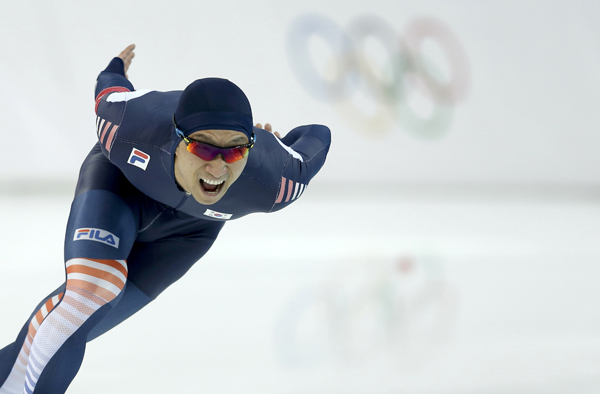 Lee Han-bin and Shin Da-woon started well in the men’s 1,000 meters short track speed skating heats yesterday. Shin advanced to the quarterfinals by finishing in second place in Group 7 with a time of 1:25.89. Lee also advanced by winning the Group 8 heat in 1:26.50. Viktor Ahn of Russia, who raced in Group 7 with Shin, won the group with a time of 1:25.84. The Koreans will race on Saturday Korea time. The men’s speed skating team continued to struggle as it failed to claim a medal in the 1,000 meters on Wednesday.

Before the Olympics began, expectations were high for speed skater Mo Tae-bum to win a medal. Kevin Crockett, the coach of Korea’s national team, said Mo’s physical condition was better than ever, adding that Mo would do as well as his female teammate, Lee Sang-hwa, who won the gold medal in the women’s 500 meters on Tuesday. But Mo, 24, the champion of the men’s 500 meters and the 1,000-meter silver medalist in the 2010 Vancouver Olympics, will leave Sochi empty-handed.

In the men’s 1,000 meters at the Adler Arena on Wednesday, Mo finished in 12th place with a time of 1:09.37. Before the race, analysts and Crockett predicted that Mo might make a huge comeback from his disappointing performance in the 500 meters on Monday, which he finished in fourth place, because he won the gold medal in the same event in the Berlin Speed Skating World Cup in December with a time of 1:09.50. Even Mo was enthusiastic about winning. In a pre-race interview, he said, “Because I have been preparing for the 1,000 meters very well, I think I can show a better performance in this event than I did in the 500 meters.”

But it was not to be. He could only watch as the gold and bronze medals went to the Netherlands and the silver went to Canada. The Netherlands won all three medals in the 500 meters and 5,000 meters. 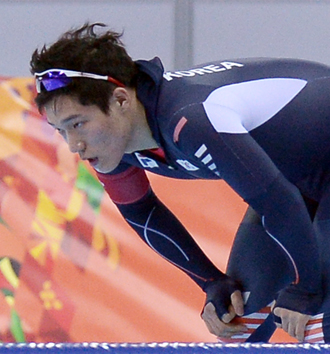 “I’m mad at myself,” Mo said after the race. “I thought I had prepared very well, but the result is way below my expectations. I tried to recover from the bad mood that I got from the 500-meter race, but I think it just didn’t work out.”

Kim Gwan-gyu, who coached the skating team in 2010, said, “Starting the race in the outer lane isn’t a good thing for racers like Mo because his best speed comes in the first 600 meters. But because he had to start the race in the lane that has a longer curve section in the beginning, he couldn’t perform his best. And in order to have a good start at the beginning of the race, he needed a sprinter type of racer who can bring a heated competition, but his race partner was Brian Hansen of the United States, who is more like a medium- and long-distance type of racer.” Hansen finished in 33rd place in the 500 meters.

“Despite the result, I learned many things in Sochi,” Mo said. “But I will not give up on the 1,000-meter event. I was considering retiring after Sochi, but I think I will race in the 2018 Pyeongchang Olympics for a happy ending.”

While Mo was looking to the future, Lee Kyou-hyuk performed his swan song at Adler Arena. His Olympic journey, which began in 1994 when he was 16, ended when he finished the 1,000 meters in 21st place with a time of 1:10.04. Lee is the only Korean athlete to participate in six consecutive Olympics.

He may be 36, but his racing style hasn’t changed at all in the past 20 years. “Some racers save their stamina to maximize their speed at the very end of a race, but I usually use my full power and try to maintain that speed until the end,” Lee said after the race.

From the 1998 Nagano Olympics to the 2010 Vancouver Olympics, Lee was always considered a strong contender to win a gold medal. He set world records in the 1,000 meters in 1997 and in the 1,500 meters in 2001. He won four World Sprint Championships and 16 World Cup events. Both Lee Sang-hwa and Mo said that Lee is their role model.

“Please don’t ask me questions that will make me cry,” Lee said when he was surrounded by Korean reporters. “I’m a racer without an Olympic medal and it just ended like this. But regardless of such an outcome, I consider myself as one of the luckiest skaters in the country, because there are not so many athletes who could continue their career this long. I have been happy on the ice.”

Lee will not skate in Pyeongchang, but he hopes to see some young and competitive prospects.

“I knew that I wouldn’t be able to win any medals in Sochi, but the reason I decided to race here was because there were no young athletes who could replace me. The country needs to foster more young skaters for its home event in 2018.”