Why not import a BOK governor?

Why not import a BOK governor? 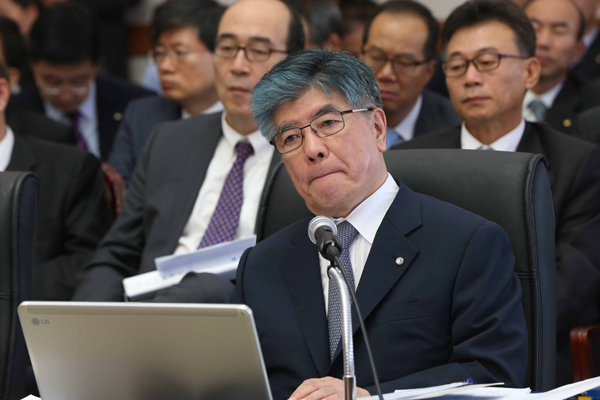 The governor of the Bank of Korea is one of the few positions that offers both honor and benefit. The governor has great authority and gets paid 340 million won ($318,950) annually. That’s more than the paycheck of former U.S. Federal Reserve Chairman Ben Bernanke, who got $200,000.

And a four-year term is generally guaranteed. Replacing the BOK governor before the end of his term would backfire on the administration.

Former Governor Lee Sung-tae was appointed by President Roh Moo-hyun, and while the Lee Myung-bak administration was not pleased with his direction, Lee completed his tenure. Incumbent Governor Kim Choong-soo’s direction is not fully in tune with the Park Geun-hye administration’s economic booster policy, but he will be able to remain at his post until his term expires in March. The BOK governor has such a major presence that even the president needs to consider the public’s opinion.

President Park has been searching for a successor since the end of last year. The next governor will stay with the administration throughout its tenure. Park wants to pick someone just right, but it seems like she hasn’t found the right match. There’s not much time if she wants the new governor to be approved at the National Assembly hearing and inaugurated on April 1.

She should have narrowed it down to a couple of candidates by now to verify credentials and get support from the public and politicians. While there are groundless rumors, no clear candidates have been mentioned. The public has not been informed about the process at all. It may be the president’s management style, but the BOK governor is not someone who can be appointed at the last minute. Even if she is not fully satisfied, she needs to discuss the candidates publicly.

The longer she contemplates, the more fastidious the public becomes. The media is now mulling necessary virtues and qualifications, but only a superman would meet those qualifications. International experience, communication skills, determination and composure are all must-haves. But sharing common ground with the government while remaining independent is contradictory.

When cornered, you find inspiration. What if we consider foreign candidates? We can bring in retired U.S. Federal Chairman Bernanke. India and even the United Kingdom have foreign central bank heads. In the era of globalization, domestic resources are not always the best. The currency and exchange rates require extreme concentration and determination.

While foreign candidates may not be able to communicate with the government as smoothly and lack understanding of the unique qualities of the Korean market, they do have many merits. A foreign candidate would have no political affiliation, so he would pass the confirmation hearing easily.

Second, the BOK would have more independence. Third, Korea’s currency policy would be more transparent, and international trust would be enhanced.

Fourth, we can learn from failing to produce a suitable candidate and work harder to train qualified specialists.

Today, two things are missing in the Korean financial industry - the next generation and authority. There are many outstanding talents, but checks, criticism and an oppressive culture have made the financial market chaotic.

In his book “The Alchemists: Three Central Bankers and a World on Fire,” Neil Irwin wrote, “Democratic societies entrust central bankers with vast power because some things are so important yet so technically complex that we can’t really put them to a vote.”

I’m envious because we don’t have such memories about our governors. We need to change now. It can’t be limited to the financial industry and the BOK governor to consider foreign imports.