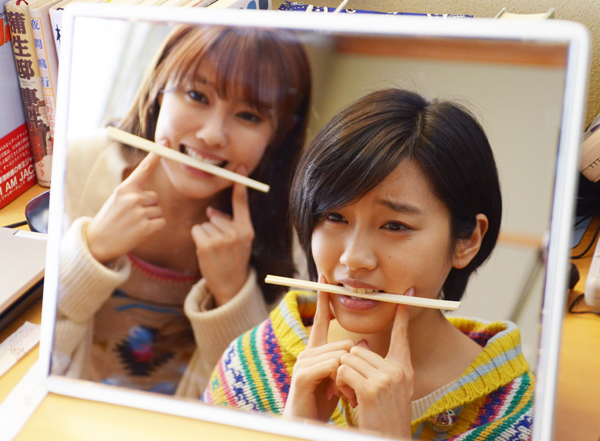 If one is looking for a good date-night movie to celebrate Valentine’s Day today, there are not a lot of options in Korea this year. There’s the American action film “Robocop,” Disney’s family film “Frozen,” the Korean comedy “Miss Granny” and the new release “Venus Talk.”

One new option, however, could be a Japanese film directed by Naoto Kumazawa that comes out today in Korea - the romantic comedy “Jinx!!!”

What makes “Jinx!!!” a more interesting choice is that it stars Hyo-min (whose real name is Park Sun-young), a singer from the K-pop group T-ara.

“I wanted to send a message to today’s young generation that after all, love is the most important thing in our lives,” said the 47-year-old director at a press conference at the COEX Megabox Theater in southern Seoul on Monday.

Hyo-min plays Yun Ji-ho, a young woman struggling with the death of her boyfriend who decides to travel to Japan to study. In Japan, she sees Kaede (Kurumi Shimizu) eating alone in the school cafeteria and tries to become friends by handing her a napkin where she’s written her name, blood type, and zodiac signs - common obsessions in both Korea and Japan.

Soon after the two become friends, Ji-ho learns that Kaede has a crush on Yusuke (Kento Yamazaki), an old acquaintance that she has never had the chance to date.

Ji-ho decides to become the love doctor for the two, advising Kaede to follow the Korean “rules” for getting someone to fall in love with you and by copying classic Hollywood romantic comedies. Needless to say, many misunderstandings ensue.

Kumazawa is once again exploring his favorite theme: unrequited love. As in his previous films, like “Rainbow Song” (2006) and “From Me to You” (2010), the director has shown relentless passion for depicting people’s inability to genuinely tell their feelings to those they love.

This time, however, Kumazawa gets the formula wrong. Kaede and Yusuke’s story fails to convince, as the two actors appear to have little chemistry.

In addition, cliches and stale dialogues make it hard to emphasize with the characters, and the actors’ performances are mediocre at best.

Then again, the film is depicting some of Japan’s social problems in the 21st century. Yusuke and his friend Hayato complain that dating someone is “time consuming.” Furthermore, Kaede refuses to conform to social expectations that she needs to be kawaii - that is, all girly, cute and subservient. At the core of the film, these are the real reasons Yusuke and Kaede are unable to express their true feelings.

If the director had focused more on unfurling the struggles of the various characters, he could have come up with a better story.

“Jinx!!!” opened in Japan in November and opens today in Korea.