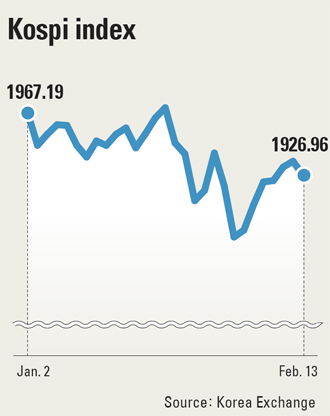 Stock strategists are cutting forecasts for gains in Korea amid the most widespread profit disappointments in seven years.

Samsung Electronics and Posco are among the 74 percent of Kospi index companies whose fourth-quarter earnings missed analyst projections, on track for the highest proportion since the second quarter of 2006, data compiled by Bloomberg show. The Kospi index is recording its worst start for a year since 2010, with results trailing estimates by the most among the emerging market countries tracked by Morgan Stanley.

Market forecasters who predicted two months ago that the Korean stock gauge would surge to a record are now reducing targets, as a combination of currency strength, lower-than-anticipated exports and falling retail sales erode profits. While bulls such as Standard Chartered predict that shares will rally as global economic growth accelerates, BNP Paribas said the results are casting doubt on its overweight position.

“It’s one of the worst in Asia” this earnings season, said Manishi Raychaudhuri, an Asia-Pacific equity strategist at BNP Paribas, France’s largest bank. “Our current overweight in Korea stands, but it seems to be questioned by this earnings trend.”

Strategists at 15 firms surveyed by Bloomberg in December predicted the Kospi would rally to 2,341 this year, exceeding its record close of 2,228.96 in May 2011.

The Kospi has dropped more than twice as much as the MSCI All-Country World Index in 2014 as reduced Federal Reserve stimulus spurred investors to cut holdings in developing nations, while manufacturing data signaled a slowdown in China, Korea’s biggest overseas market. Foreign money managers have sold a net $2.3 billion of Seoul-traded shares this year.

Fourth-quarter net income in Korea has so far trailed estimates by 29 percent, Morgan Stanley wrote in a Feb. 12 report. The 74 percent of Kospi index companies that trailed analysts’ expectations compares with an average of 52 percent during the past seven years, data compiled by Bloomberg show.

About 61 percent of MSCI Emerging Markets Index companies have trailed estimates, while the proportion is 32 percent for the MSCI World Index of advanced-country shares.

Samsung, the world’s biggest smartphone producer and Korea’s biggest company by market value, reported the slowest profit growth since 2011 on Jan. 24, as currency moves cut the value of overseas sales and growing competition in the handset market eroded profit margins.

Lotte Shopping, the operator of department stores and discount stores, which gets most of its revenue in Korea, plunged to a five-month low last week in Seoul after earnings trailed estimates. Posco posted a 44 percent tumble in 2013 earnings amid waning demand from builders of ships, cars and houses. Posco is more optimistic about the outlook for 2014, predicting that a global economic revival will help lift sales this year. That may also provide a boost to the broader Korean equity market, according to Standard Chartered.

U.S. economic growth has picked up and there’s a “broad improvement” in the labor market of the world’s biggest economy, Federal Reserve Chairwoman Janet Yellen told lawmakers on Feb. 11. While an official gauge of Chinese manufacturing dropped to a six-month low in January, data yesterday showed that the nation’s export and import growth had accelerated.

“The global backdrop continues to steadily improve, and that’s the fact that drives us to be constructive both on Korea and for the cycles in the Korean market,” Clive McDonnell, an equity strategist at Standard Chartered in Singapore, said in a telephone interview on Feb. 10. He has a Kospi target of 2,400, or 24 percent above yesterday’s close.

Some of the earnings disappointments may have been caused by one-time accounting write-offs coinciding with the appointment of new corporate managers who want to frontload losses, according to Morgan Stanley and JPMorgan Securities.

KT, Korea’s second-largest telecommunication services provider, whose new chief executive took the helm in January, reported a one-time 110 billion won ($104 million) loss in the fourth quarter, according to Samsung Securities. The company is working to improve earnings, KT spokesman Kim Dong-woo said by telephone on Wednesday, declining to comment on the fourth-quarter results.

“The bottom line is that these are just one-offs, so it will probably not recur,” Shawn Kim, the head of Korea equity at Morgan Stanley, said by telephone on Feb. 11 from Seoul.

Korea’s economic data has shown a fragile recovery. Exports unexpectedly declined in January, while the unemployment rate recorded a surprise increase. Department store sales dropped 0.3 percent from a year earlier in December. The won declined 1.2 percent this year, after an advance of almost 10 percent in the previous two years. The three-year government bond yield fell three basis points to 2.86 percent this year.

Earnings projections for Korea are still too high, according to Samsung Securities. Net income will probably grow between 6 percent and 7 percent this year, versus the consensus analyst estimate of 24 percent, said You Seung-min, the firm’s chief strategist.