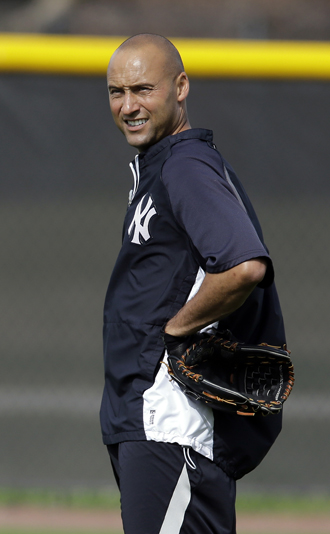 Derek Jeter, seen here at the New York Yankees’ minor league facility on Wednesday, has played for the team since 1995. [AP/NEWSIS]

Yankees shortstop Derek Jeter says he will retire after this season “with absolutely no regrets,” ending one of the greatest careers in the history of baseball’s most storied franchise.

The 39-year-old New York captain posted a long letter on his Facebook page Wednesday saying that 2014 will be his final year.

A 13-time All-Star who has led the Yankees to five World Series championships, Jeter was limited to 17 games last season while trying to recover from a broken left ankle sustained during the 2012 playoffs.

“I know it in my heart. The 2014 season will be my last year playing professional baseball,” he wrote. “I have gotten the very most out of my life playing baseball, and I have absolutely no regrets.”

“Last year was a tough one for me. As I suffered through a bunch of injuries, I realized that some of the things that always came easily to me and were always fun had started to become a struggle,” Jeter wrote. “The one thing I always said to myself was that when baseball started to feel more like a job, it would be time to move forward.”

“So really it was months ago when I realized that this season would likely be my last. As I came to this conclusion and shared it with my friends and family, they all told me to hold off saying anything until I was absolutely 100 percent sure,” he wrote. “And the thing is, I could not be more sure.”

His agent, Casey Close, said Jeter wanted to declare his intentions before the Yankees start spring training later this week so that his future status wouldn’t be a distraction.

“I’m excited for him. It’s kind of nice to see him go out on his own terms,” Los Angeles Dodgers manager Don Mattingly said at spring camp in Glendale, Arizona.

Mattingly finished up his All-Star career with the Yankees in 1995, the same season Jeter made his big league debut.

“I saw him when he first showed up for spring training. I always think about spring training when I think about him, just because he was this 17-year-old kid right out of high school who looked out of place. He was skinny, but he was tough. He’s been winning since the day he got there,” Mattingly said.