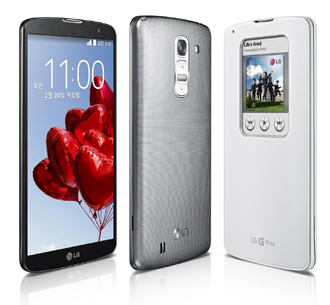 LG Electronics’ G Pro 2, a 5.9-inch “phablet” that will begin selling in Korea later this month. The unveiling of the device came after rival Samsung Electronics hinted it would unveil its Galaxy S5 on Feb. 24. Provided by the company

LG Electronics unveiled its new large-screen, versatile smartphone, the G Pro 2, yesterday, as the company feels the competitive squeeze in both the premium handset market and low-end market.

The G Pro 2 has a 5.9-inch full HD IPS display, compared to its previous model, the 5.5-inch G Pro, as many global mobile phone makers beef up their “phablet” offerings, which together with tablet PCs are quickly replacing desktop PCs as default computing devices. Apple is also reported to be releasing a larger iPhone later this year.

The company accelerated its unveiling of the smartphone after rival Samsung Electronics hinted that it would unveil its Galaxy S5 at the Mobile World Congress in Barcelona, Spain, on Feb. 24, where LG was initially expected to unwrap the phone.

LG, which has been surpassed by two Chinese rivals in global smartphone market share, is seeking to differentiate itself with continued innovation following its well-received curved phone, the G Flex, which was released in November.

The G Pro 2 is equipped with various attention-catching functions, such as a Knock Code unlocking feature, which a spokesman for the company described as “groundbreaking.”

The feature, built on the KnockOn function on the LG G2, enables a user to unlock his or her phone without looking at it. The user only has to make a series of pre-arranged taps on any part of the screen, ranging from two to eight taps.

That allows 86,367 “knock” combinations, the company said, which makes the phone no more vulnerable to the unwanted unlocking than with the traditional finger-swiping unlocking mode.

“Whereas in the early years of smartphones it was a contest to see how many features could be stuffed into the phones, our researchers took a long, hard look at how consumers were really using their devices in their daily lives and included just the most useful features. We think customers will agree,” Park said.

The product will be sold in Korea later this month. Global sales will begin in Asia next month and expand to other parts of the world later in the year, the company said. The price has yet to be determined.

The phone is crucial for the company’s turnaround after its massive marketing expenses for the 5.2-inch G2, which was in New York in August. The company’s mobile communications unit took a 79.7 billion won ($74.9 million)?operating loss in the third quarter, a plummet from 132.8 billion won in operating profit in the first quarter, although the loss was narrowed to 43.4 billion won in the fourth quarter.

Moody’s Investors Service lowered LG Electronics’ credit rating by one notch to BAA3 on Feb. 6, citing its pessimism over an early turnaround to profitability. LG’s operating profit margins will hover in the 3 percent to 4 percent range for the next 12 to 18 months due in part to heated competition in the smartphone market, in particular stronger challenges from Chinese companies, Moody’s said.

“There is some speculation about us, but we are confident that our G-series products will help keep our edge in the premium handset market,” said an official of LG Electronics.