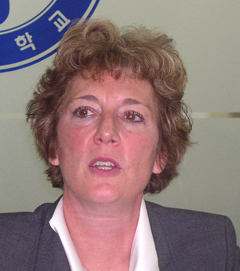 WASHINGTON, D.C. - Suzanne Scholte, a longtime American human rights activist for North Korea and Western Sahara, announced this week her decision to run for a seat in the U.S. House of Representatives, part of a broader plan to address human rights violations at the congressional level.

“A congressman is a servant,” she said in an interview with the JoongAng Ilbo on Wednesday. “I want to be a servant for the people.”

At a local Korean cuisine restaurant in Annandale, Virginia, on Wednesday, she held a press conference with reporters where she made public her plans to represent the state’s 11th district as a Republican candidate.

Virginia’s 11th district is known to have a sizable Korean population, and Asian voters account for 17.4 percent of the ballots from that constituency.

For more than 18 years, Scholte has worked as a human rights activist, with a focus on North Korea, collaborating with the U.S. and South Korean governments.

If elected, she said she would focus on passing a pending congressional bill that would impose stricter sanctions on North Korea.

“My human rights advocacy for the world’s most persecuted has taken me to the very borders between freedom and oppression: the DMZ in Korea and the Wall of Shame in Western Sahara,” she said in a press release.

“I have built coalitions and consensus with people of very diverse opinions and backgrounds to advance democratic ideals, while never compromising my principles. I truly believe that the solutions to our problems are not out of reach - if we work together.”

Her husband, a lawyer, also attended the press conference.

Scholte told the JoongAng Ilbo that she decided to run for Congress in December around the Christmas holiday after discussing the possibility with her family and friends.

One of the core hurdles in her campaign will be funding, Scholte admitted. She added that she hoped Korean residents in the United States would be financially supportive of her campaign.

If Scholte wins the GOP candidacy, she will run against Gerry Connolly, the incumbent Democratic representative for Virginia’s 11th district.