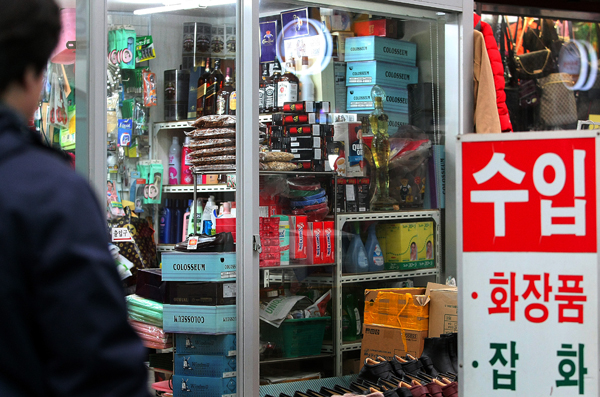 The hanok market in Daegu, situated in a residential area not far from Camp Walker and Camp Henry, wasn’t hard to spot.

The woman who answered the door was in her 60s and quickly ushered in her guests, leading the way to a room filled with imported goods. When asked whether these products were legitimate, she admitted they had come from American Post Exchange (PX) markets.

“We sell the imported goods coming from the PX market pretty cheap, so a lot of customers come looking for them,” she added.

One such customer, a man only identified by his surname Lee, bought a bottle of liquor recently for 70,000 won in a clothing shop in Pyeongtaek. That same bottle, which came from a nearby American PX market, usually sells between 120,000 won and 130,000 won in regular stores.

“It’s not only liquors, they also sell food and sometimes medicine at half the price you normally see,” Lee said.

American PX black markets waned in the early 2000s, but they’ve begun to re-emerge in recent years as the result of a sluggish economy. In the 1980s and 1990s, consumers mainly longed for rare American items, but financial uncertainty has increased general demand for cheap goods. And that’s where PX markets come in.

Because there are no import tariffs on PX goods, even if smugglers and sellers uptick prices for their own profit those products are still cheaper than at market value.

In Uijeongbu and Dongducheon, where the movement of PX goods was once strictly controlled and eventually vanished, there has been a resurgence of black markets, including in the areas of Daegu, Pyeongtaek and Osan. The goods there are smuggled out of the military bases and sold in nearby shops and markets.

Some stores in the Daegu Bongduk Market mark smuggled PX items as “imported goods.” And even blankets for American soldiers are for sale in Daegu’s Kyodong Market.

“The middleman will ask his family or the American soldiers in the camp to bring stuff out from the [military’s] PX market and will provide commission,” said a man, also surnamed Lee, who admitted that he was involved in smuggling of PX products a few years ago. “They bring items out a few at a time. There are normally military police who check for goods, but it’s just a formal procedure. No one actually gets caught.”

Then the middlemen sell those good to retailers, Lee continued. “The price doubles from what it was in the PX market on the military base, but it’s still a lot cheaper than the market price,” he said.

Perpetrators caught smuggling PX goods or selling them on the black market can face up to five years in prison. A customer who knowingly buys products from a PX market can also be imprisoned for up to three years or get slapped with a fine.

But even though a slew of PX markets can be found around town, authorities have refrained from making efforts to control the situation. And police and local governments stand by that decision.

The district office claimed it was not in charge of controlling the smuggling of goods from PX markets, but rather, was only responsible for reporting a false indication of the origin of goods in import declarations.

“According to current laws, the taxation authority has to sue the relevant office first in order for us to start an investigation,” a police official said.